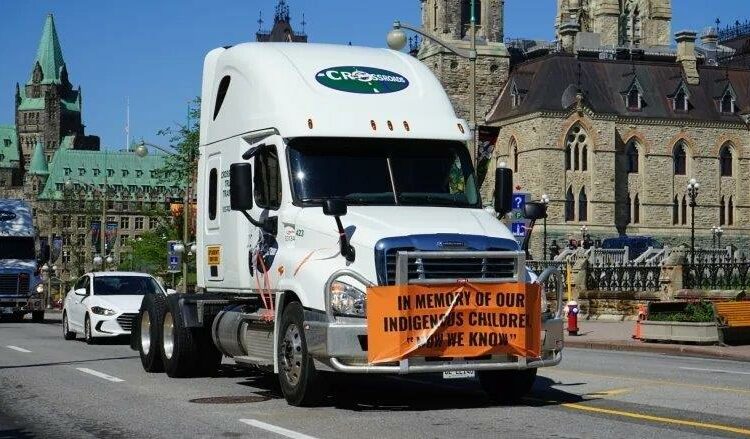 A cacophony of horns blared as a memorial convoy of trucks drove through downtown Ottawa Sunday morning, honouring Indigenous children who died at residential schools.

Dozens of semis, dump trucks, flatbeds and pickup trucks took part in a procession that began in the village of Ashton, Ont., and headed down Highway 417, into downtown Ottawa and past Parliament Hill.

It was a show of support for Indigenous communities affected by the recent discovery of what are believed to be children’s remains at a former residential school in Kamloops, B.C.

Passersby stopped to watch, wave and take photos. Two people wearing orange shirts — which have come to signify the process of reconciliation following the harm caused by residential schools — stood silently and waved.

‘Just trying to do our part’

Gatineau, Que., resident Lyoness Woodstock, a four-decade veteran of the trucking industry, said the idea for the 215 Truck Rally came from his friend Roger Steepe, a trucker whose grandmother survived the residential school system.

“We’re just trying to do our part in making sure that this news of these atrocities stays front-and-centre,” Woodstock told CBC News Saturday before the rally.

“This is not something [that can] just slip away into some kind of a closed file. These were innocent children and innocent families that were put through this and lived through it.”

Vigils, marches and ceremonies have been held across the country following the announcement by the Tk’emlúps te Secwépemc First Nation that preliminary findings from a survey of the grounds at the former Kamloops Indian Residential School had uncovered the remains of 215 children.

The news shocked the country and brought the harm and trauma caused by residential schools back into the spotlight.

Flags were lowered to half mast. Prime Minister Justin Trudeau pledged more support for survivors of residential schools and the Ontario government announced $10 million to identify, investigate and commemorate residential school burial sites in the province.

In Kingston, Ont., a statue of Sir John A. Macdonald that stood in a downtown park was taken down over objections to its presence and anger at Macdonald’s role in the residential school system.

Woodstock said he was surprised by the response to the truck rally, as he and Steepe were able to recruit truckers from eastern Ontario and western Quebec over social media.

“As one of my friends said, this is simply a convoy of reconciliation, peace and love for humanity,” said Woodstock.

“We just want to show our support to this community.”