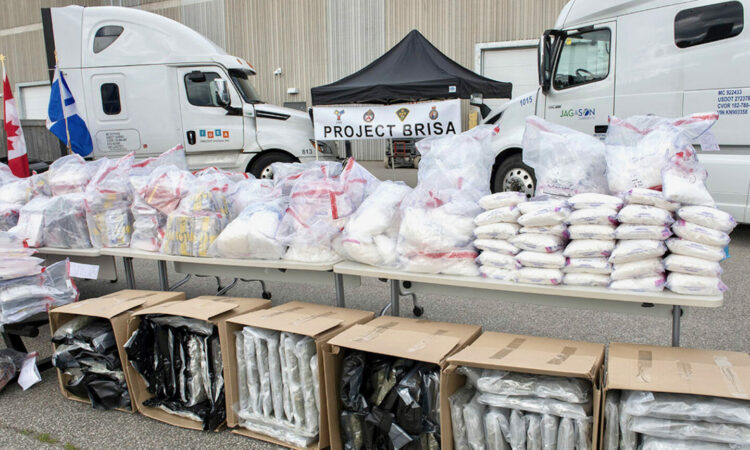 A drug-smuggling ring used commercial trucks with secret compartments to transport millions of dollars of cocaine and methamphetamine from Mexico and California to Canada before authorities took it down, police said Tuesday.

Police seized $50 million worth of drugs and arrested 20 people after a six-month investigation dubbed Project Brisa led by the Toronto Police Service. Five tractor-trailers also were seized in the case, which involved multiple Canadian and U.S. law enforcement agencies, including the U.S. Drug Enforcement Administration and Homeland Security Investigations.

The traffickers evaded detection at borders by installing hidden compartments with hydraulically powered traps in the cabs of trucks that were capable of hiding about 220 pounds of drugs. The suspect accused of performing the installations, Jason Hall, 43, of Surrey, British Columbia, was nicknamed “The Trap Maker,” police said.

“They were sophisticated to the point where [the] X-ray was not able to penetrate those traps,” Ramer said.

The drug runs took place from November 2020 until May and utilized U.S.-Canada border crossings in Ontario, police said. The drugs were destined for Canada’s largest city, Toronto, and its vicinity but also distributed to other areas.

The investigation began after an initial seizure of drugs from a truck hauling hairdryers, Toronto Police Inspector Tyrone Hilton told FreightWaves. It inspired the name of the investigation, Brisa, which means “breeze” in Spanish, said Hilton, the commander of the department’s drug squad.

Most of the drug loads were transported in the secret compartments in the truck cabs. The drivers themselves had access to the compartments and would have known about their contents, Hilton said.

Hilton declined to say whether any of the suspects charged are truck drivers or otherwise employed in the trucking industry.

The drug seizure set a record for the Toronto Police Service. But authorities in Canada and the U.S. have reported a jump in large-scale drug trafficking involving commercial trucks since the border shut down for nonessential travel in March 2020 because of the COVID-19 pandemic.

Hilton noted that trucking “is a difficult profession” and that most drivers aren’t involved in criminal activity.

“The unfortunate thing about this is that it heightens the tension and scrutiny for drivers and companies doing the right thing,” he said.