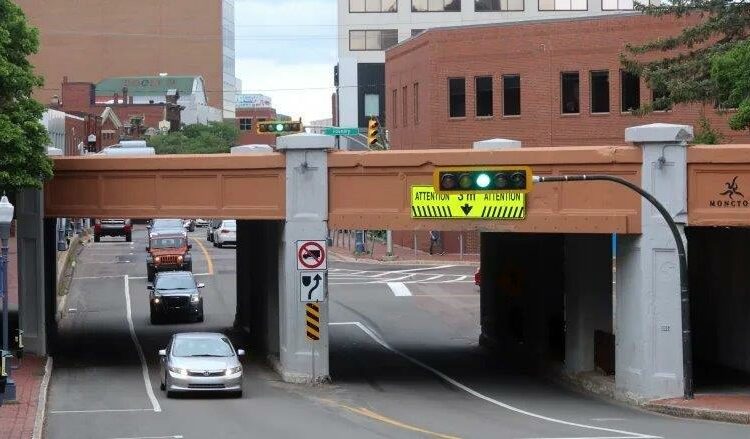 It happens several times a year. A driver misses the warning signs and smashes their truck or RV into Moncton’s subway overpass, blocking traffic and prompting a response by emergency crews.

Until now, the city has relied on signs along routes approaching the overpass, warning drivers of low clearance. The overpass’s clearance is three metres, which is lower than a standard five-metre overpass clearing.

But at a committee meeting on Monday, city staff put forth a suggested improvement.

They proposed that councillors approve spending around $180,000 on a system that would detect vehicles too large to fit under the bridge, and trigger flashing signs to warn them.

“We all know we have a bit of a problem” with crashes, Jack MacDonald, the city’s general manager of sustainable growth and development, told councillors during the meeting.

“I think this will give us our best chance of that stopping.”

The system would require the installation of poles with infrared sensors. When an oversized vehicle breaks the infrared beam, warning signs would light up farther down the street.

The sensors would be installed on the eastbound lane of Main Street, westbound Main Street and northbound Foundry Street.

Coun. Susan Edgett worried the system won’t be enough, considering the number of signs that are already in place.

Coun. Paul Richard asked why CN, which owns the overpass, isn’t helping cover the cost of the system.

MacDonald told council CN has been asked about this, but has indicated it won’t contribute.

Their opinion, he said, is that the overpass is “built like a tank, so CN doesn’t feel like they have a problem.”

Councillors voted to delay moving ahead with the purchase to get more information about the system, its effectiveness in other areas that have installed it and whether fines could be levied against drivers who miss existing signs and hit the overpass.