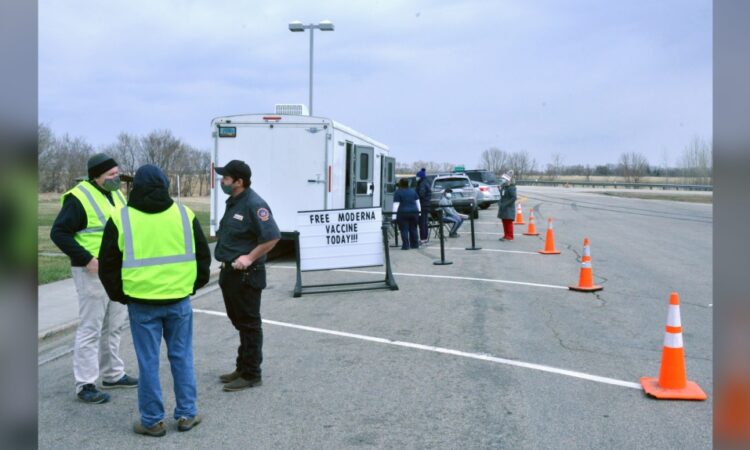 WINNIPEG — More than 2,500 COVID-19 vaccine doses have been administered to Manitoba truck drivers in North Dakota.

“That successful partnership with North Dakota is going to be extended right through July, and we encourage others who might be in the trucking business to use that opportunity to get that shot if you haven’t gotten it yet,” Pallister said at a news conference.

In April, the two governments announced the Essential Worker Cross-Border Vaccination Initiative, which allows for Manitoba-based truck drivers, who are transporting goods between Canada and the United States, to schedule vaccine appointments in North Dakota on their routine trips.

The first clinic opened on April 21, and since then, 2,523 doses have been administered through the program. This includes 1,719 first doses and 804 second doses.

Manitoba and North Dakota established a joint operations group to manage the initiative, with the North Dakota Department of Health providing nurses and staff members to give the vaccines.

This initiative comes at no cost to the state or the province, as the U.S. government provides the vaccines and reimburses the costs to administer the doses.

“The success of this first-of-its-kind program between North Dakota and Manitoba is a testament to our strong commitment to protecting public health and providing safe, effective vaccines to those essential workers who transport goods and services across our border,” Burgum said in a news release.

“By extending the program through July, we can continue to protect the health of our citizens and our economies as we move closer to the reopening of our shared border.”

One of the North Dakota clinics that has been extended into July is the Drayton pop-up clinic, located on the I-29 near Drayton. There will also be a weekend pop-up site throughout July at the GasTrak off the I-29 in Pembina, N.D.