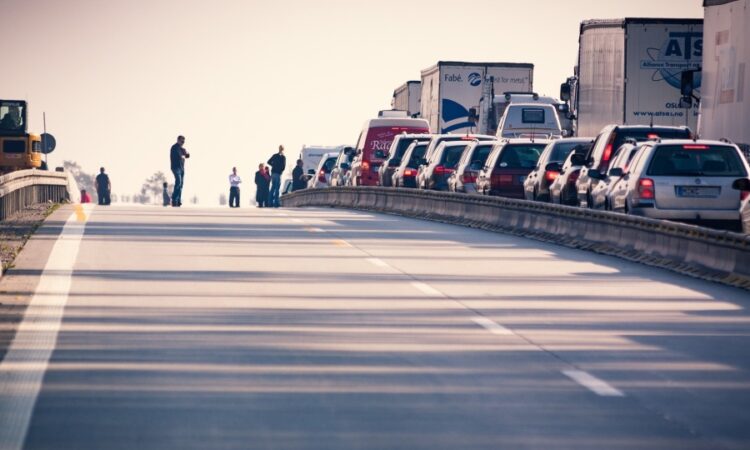 FORT LAWRENCE, N.S. — Gridlock on the Trans-Canada Highway at the Nova Scotia and New Brunswick border has been a familiar sight over the course of the COVID-19 pandemic, and Wednesday was no different.

Anyone travelling into Nova Scotia from the bordering province must now follow the same requirements as those coming from outside Atlantic Canada.

Daryl Fawcett and his wife stood on the overpass overlooking the border checkpoint early Wednesday taking photos of the congestion.

“We were kind of curious to see if there’d be a lineup or any vehicles,” said Fawcett.

The Amherst, N.S. resident says he’s concerned about local tourists not wanting to enter either province due to the new travel requirements.

“I would be one of those impacted because I don’t plan on going because I’m not fully vaccinated.”

Bill Dowe, president of the Amherst and Area Chamber of Commerce, has similar concerns, though the trucking company owner says he fully supports the vaccination requirements.

“If there are some people that are still in the process, in the transition period between the first and second shot, they’re not going to want to go to Moncton or across the border and then come home and have to isolate for a week,” says Dowe.

Those who did choose to travel Wednesday say the online approval process was simple.

“It just took me less than five minutes for both of us, and then we received the ok that we’ve done what we need to do, so I was confident, it was fine,” says Ontario resident, Diane Thomson, who was travelling with her husband.

Anotha Hitler and her family of fourteen were on their way to Cape Breton Wednesday afternoon. The Toronto native says she filled out all of her necessary information before leaving Ontario.

“Actually, I think we felt more comfortable doing that so we know we’re protected and everyone here is safe,” says Hitler.

Despite a seemingly long lineup at the border crossing throughout the day, Thomson and her husband say it didn’t take long for them to get through.

“Once we figured out which lane we had to be in, being non-Atlantic, it was fine. It was about a 10-minute wait, but we had all our documents ready and we just said thank you and we went on.”