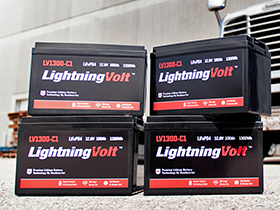 Designed in Canada, it offers the power without idling an engine or running a generator.

The 100Ah battery lasts 10 times longer than traditional batteries, the company notes, also referring to benefits such as a greater dept of discharge, and performance in freezing temperatures. It also promises to double usable power.