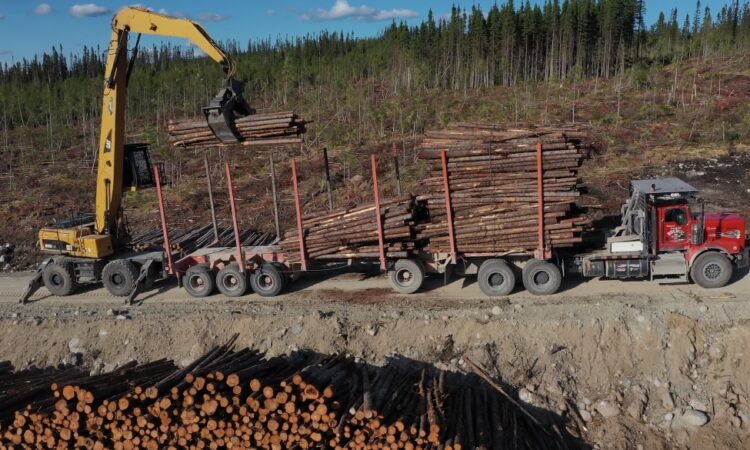 Larry Bolduc has been a truck driver for more than 25 years and is now the head of the family business Transport Raoul Bolduc in Girardville, Que., in the Saguenay/Lac-St-Jean region.

He also launched another business in parallel, called Électrocamion. The business plan is to convert forestry or mining trucks into hybrid diesel-electric vehicles, whether they are new or existing.

Like many inventors before him, Bolduc first tested his mechanical concepts on himself, or on his truck, we should say. His massive Kenworth C500, which he uses every day to transport freshly felled trees to processing plants, became his hybridization laboratory.

In an interview with Transport Routier, he explains that an all-electric engine was not an option for very heavy off-road transport. And when we say very heavy, we’re talking about a gross vehicle weight of between 150 and 160 tons. “You’d have to have a trailer full of batteries,” he says to illustrate the commercial non-viability of an all-electric truck that carries its payload in battery weight.

On the other hand, he mused, backing up an electric motor with a diesel engine could make the latter consume less fuel when a power surge is required, such as when climbing a hill. And the good thing about a slope you climb is that it inevitably comes down on the other side, allowing the batteries to be recharged through regeneration.

This regeneration also provides an estimated 240 hp of braking force, reducing wear on the service brakes as well as the engine brake. “You hardly ever use it, except when you have a really steep grade,” he says of the engine brake.

His first discussions with the electric motor manufacturer TM4 (then part of Hydro-Québec) took place in 2009, when he was considering installing electric motors on his axles.

The self-taught man has surrounded himself with people who could support him in his project to hybridize a truck of this size. Companies like Kenworth Quebec, to whom he turns when he has specific technical questions, researchers Jan Michaelsen and Dave Waknin of FPInnovations, LTS Marine for its first generation of batteries and the touch-screen on-board computer that manages the interaction of the diesel and electric engines, and the St-Félicien Diesel workshop for practical mechanical questions.

“At the very beginning, they were the ones who drew up the plans, who drilled the differential. They helped me a lot to make the prototype,” Bolduc says of St-Félicien Diesel.

The reason he mentions drilling the differentials is that the two driveshafts that work together had to be tied together: one for the diesel engine – a Cummins X15 with 605 hp and 2,050 lb.-ft. of torque – and the one coupled to the electric motor. The electric motor is a Sumo HD model from Dana-TM4, which is rated at 250 kilowatts, or the equivalent of about 350 hp.

The two lithium-ion batteries with 21 kW/h each are located on top of the chassis with their temperature control system, just behind the cab shield.

New, more powerful and lighter batteries will soon replace them.

“At the moment we are not able to get all the power from the electric motor. With the new batteries, we’ll be able to use the 250 kW,” says Bolduc, adding that he is in discussions with Montreal-based EV Technologies for batteries that, in addition to being powerful, will each be at least 100 kg lighter.

This is the type of battery he intends to use on a brand new C500, which he is due to take delivery of next February, and which he also intends to convert – drawing on the experience he gained with his prototype – into a hybrid truck for demonstrations to potential customers.

“We’re going to correct the little shortcomings we had with the prototype and it will really be a truck that we can let people try out,” he says of Electrocamion’s first “production” truck.

Based on experience with the current prototype, the contribution of the electric motor to reducing the effort of the big diesel Cummins, as well as its fuel consumption, is tangible. Asked to put a figure on these savings, he replies: “It depends on the sector. We’re looking at 12% to 15%. The more mountainous the areas, the more the regeneration savings there are.”

That’s why he’s also considering converting more conventionally sized Class 8 highway trucks that travel on roads that are hilly enough for the hybrid to give full effect through regeneration on deceleration to his hybrid system.

“In the future, the idea is to manufacture retrofit kits that we can sell to dealers who can install them,” he says of his business plan. So, there’s no question of building a factory at this point. “The customer will come and have it installed at our place or at an appointed dealer,” says Bolduc, who estimates that he has invested $300,000 in Electrocamion so far.

It is still too early to establish a sales and installation price for the Electrocamion hybrid solution, but the inventor certainly intends to make it eligible for the Ministère des Transports du Québec’s Ecocamionnage government rebate program.

In the meantime, Bolduc and his sons Gabriel, Alex and Mathieu, who are also shareholders, are continuing to garner support from major companies interested in reducing their carbon footprint – Arianne Phosphate for the Lac à Paul mining project and Resolute Forest Products, for example – and fine-tuning the electrocamion.com website, which features content in both French and English.

Larry Bolduc is keeping both feet on the ground, however, and once the interview is over, he’s ready to get back behind the wheel of his first C500 hybrid, which is working around the clock.

The hours are long in the forest, but Bolduc still enjoys driving his “baby,” which may itself give birth to a thriving business. “You can feel the force, but it’s smooth, it doesn’t hit you,” he says of the Électrocamion’s driving experience.