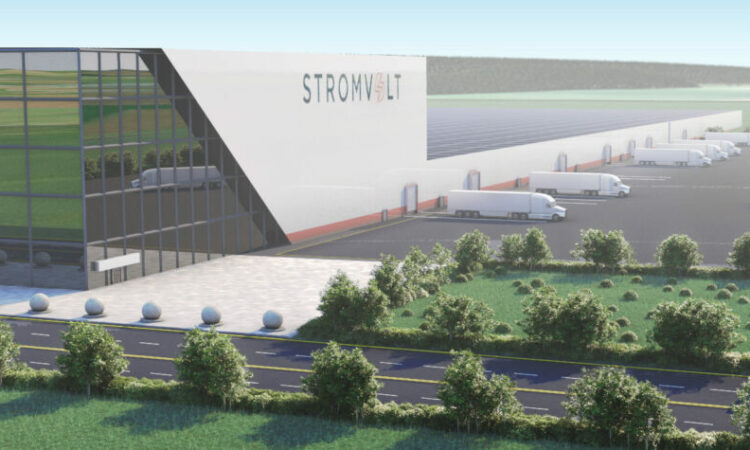 In a surprise announcement to kick off the 2021 Electric Mobility Canada annual conference, Canada may soon be getting its first battery cell manufacturing plant, likely located in Quebec.

The company behind the plant, StromVolt Americas Inc., is also brand-new. Its CEO, Maxime Vidricaire, made the announcement when he appeared as the opening speaker in the EVVÉ2021 event’s debut panel, dedicated to the topic of what Canada needs to do to get to 100 per cent light-duty electric vehicle sales by 2035.

The factory will also include an R&D centre “to test out new chemistries and cell formats with the goal of finding the ideal chemistry for downstream operations in all formats.”

StromVolt, incorporated in late August, according to public records, with Vidricaire listed as sole director and CEO, is seeking government support to build the factory and has partnered with Taiwanese firm, Delta Electronics, to help execute the plan.

This month, StromVolt purchased cell manufacturing equipment from Delta for US$13.9 million and Vidricaire says the company is also transferring its technological IP and will provide training on how to manufacture cells over the next two years.

Vidricaire estimates the total project will cost $200-to-$300 million, according to a report today in La Presse.

The StromVolt plant hopes to supply lithium-ion battery cells to local, Quebec-based EV manufacturers like Lion Electric, BMP, Taiga Motors and Nova Bus before potentially moving into the international market. The 400,000-square-foot factory will have an initial capacity of 250mWh, expanding to 10gWh by 2030. Vidricaire did not provide a cost for the factory or state where the funding will come from, but lobbyist records indicate the company is pursuing government funding at the federal and provincial levels specifically for a factory located in Quebec.

Vidricaire cautions that while impactful, StromVolt’s facility will need to be joined by other cell manufacturers to meet Canada’s full needs.

In addition to heading up StromVolt, Vidricaire, age 31, is also founder of Ontario-based company Stromcore Energy Inc., which is described in company literature as “the leading designer and manufacturer of lithium-Ion forklift batteries. We offer intuitive plug-and-play solutions for almost all existing 24V, 36V, 48V and 80V forklifts.”

Stakeholders and experts on Canada’s EV battery supply chain have long called for an investment in battery cell manufacturing. It is a gap in the consolidation of a value chain that would allow Canada to produce EV batteries end-to-end for domestic and international use.

In that context, the StromVolt announcement is just the first pebble of the avalanche in battery manufacturing that Canada needs to have before it can claim a self-sufficient supply chain.

“Canada is obviously a little way behind it not having cell manufacturing capacity announcement moment. One of the clear things that we see as a benchmark is that if you’re going to have an electric automotive industry, you need to have cell production,” says Andrew Leyland, head of strategic advisory at Benchmark. “It’s really is critical for [Canada] to have probably more than one plant being constructed and being announced in the next couple of years.”

But, says Leyland, the supply chain doesn’t begin and end with one or even multiple cell manufacturing plants. There remain other supply chain holes for Canada to shore up if it wants to be competitive.

“There’s still a bit of work to do to get those raw materials from the conceptual stage through to the cathode manufacturing and then the cell manufacturing. It’s a really important step that people quite often miss out on. If you’re just producing the raw materials and then the batteries, but don’t have the cathode or anode capacity you’ve got to ship that material halfway around the world and back again. Attracting that part of the supply chain is, is really critical,” says Leyland.

But the announcement of Canada’s first cell manufacturing plant is a step in the right direction, says Leyland, and it may serve as an essential catalyst to draw the attention of several international investors circling the Canadian marketplace and weighing out opportunities to invest in the battery supply chain.

“In many respects, you could say that [cell manufacturing] is just going to be the beginning of the journey for actually rolling out the supply chain in Canada,” says Leyland.

StromVolt’s facility address as listed in lobbyist documents is situated in a tidy low-rise commercial complex abutting a Mississauga-Ont., highway — roughly 30 minutes away from Toronto. Its headquarters are detailed as having a downtown Toronto zip code. Both addresses are also used by Stromcore, which was founded in 2016 by Vidricaire.

Public records show StromVolt is not a coalition or a subsidiary company. It is listed in lobbyist registries at the provincial and federal level and its activities in the latter are described in documents in French and translated as: “Approaches to the Ministry of Innovation, Science and Industry in order to obtain financial support in the form of a subsidy through the Stragic [sic] Innovation Fund program, the amount of which is undetermined, for the establishment of a manufacture of lithium cells that will be used in batteries for electric vehicles. The specific location remains to be determined. The funds obtained would be used to deploy the project, that is, to purchase materials and build the plant.”

Stromcore’s batteries are designed to be customizable — similar to the recently announced GM Ultium platform — to offer stackable combinations of batteries that cater to the needs of the machine. Each Stromcore battery pack is individually connected to the internet and cloud and is individually controlled and serviceable, says the company. Each battery cube can be swapped out one at a time, as needed.

Of the roughly 60 per cent of the North American forklift fleet that is already electrified, nearly all — 99 per cent — run on lead-acid batteries. Stromcore says its product offers a more energy efficient and environmentally way to be zero emission as well as, “ever faster charge rates, longer run times, remote monitoring and servicing [and] active heating for freezers.”

In 2019, Stromcore secured US$600 million in bonding facility from Export Development Canada and RBC to support the company’s capital needs. At the time Vidricaire said most of Stromcore’s sales are exports.

That Stromcore has a strong presence on the international marketis not surprising when considering the background of its founder. Vidricaire, who is the son of retired Canadian diplomat to Germany and Austria, Marie Gervais-Vidricaire, and Marc Vidricaire, formerly with the Canadian Foreign Service and from the International Atomic Energy Agency.

Vidricaire attended school in Austria before attending McGill University between 2009-2012. He then went on to work with his now Mississauga neighbour, Electrovaya, when the battery manufacturer acquired European battery factory, Litarion GmbH, in 2015. Vidricaire stayed on through that year at Litarion in Germany after the acquisition as head of business development.

By March 2016, Stromcore was founded with Vidricaire setting up headquarters in the Greater Toronto Area.