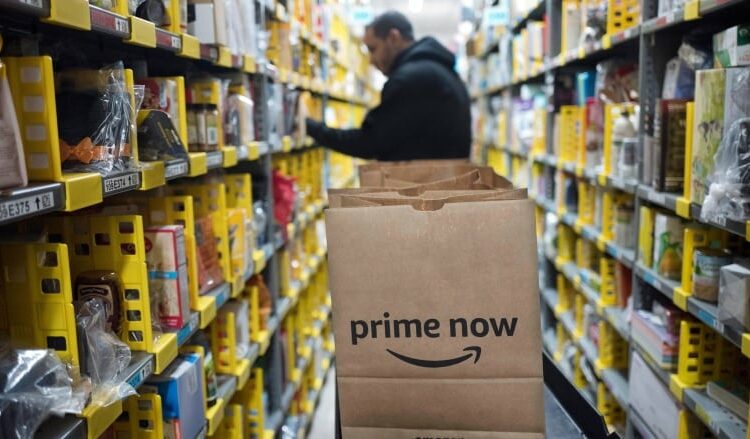 ‘It’s the most rapid decline in vacancy rates that we’ve seen in Calgary,’ analyst says

Calgary is in the middle of an industrial real estate boom as high rental prices and low vacancy rates in places like Vancouver drive companies to snatch up warehouse space.

The vacancy rate for warehouses, distribution centres and other bays has dropped to five per cent in Calgary and the surrounding area, according to a market report from Colliers.

“It’s the most rapid decline in vacancy rates that we’ve seen in Calgary, certainly in my career,” said Tyler Wellwood, a senior vice-president of industrial properties with Avison Young in Calgary.

Amazon, Walmart, Home Depot and Canadian Tire have all established facilities in Alberta in the last few years.

Lowe’s distribution centre is the most recent major project. Construction of a 1.2 million square foot space near Balzac was completed this summer.

“Calgary has been established as a western Canadian distribution hub for large retailers and warehouses for 20-plus years now. It’s really emerged in the past 18 to 24 months,” Josh Magnussen, a Calgary vice-president for Colliers, told CBC News.

Calgary is cheaper and has more options for space than other distribution hubs like Vancouver, making the city a draw as the B.C. city nears a zero per cent vacancy rate for industrial space.

Purchasing a warehouse here costs an average of $3.5 million less than in Vancouver, according to a 2018 analysis by Triskele Logistics for the City of Calgary. It also found shipping costs by truck within Western Canada are almost 50 per cent cheaper from Calgary than from Vancouver.

The average lease rate per square foot of space there is $15.50, per industry reports. Calgary’s prices are nearly half that, at $8.20 per square foot for large warehouse space.

Because Calgary sits on major highway and rail axes that go north-south and east-west, an estimated 50 million consumers are within 24 hours of ground transportation.

Calgary also has no shortage of land for new warehouse space, whereas Vancouver’s geographic growth is limited by the mountains and ocean.

“The geographic location, the combination of land availability and large investment concerns coming into the city and being comfortable and established here, creates a good ecosystem for the addition of new and large industrial parks,” Wellwood said.

“It gives a constancy and a stability for large logistics users and manufacturers to consider Calgary as a good opportunity and a good option for locating their expansion.”

The bulk of the transactions are coming from e-commerce and distribution companies.

Alberta also doesn’t have a payroll tax, according to the minister of jobs, economy and innovation.

“When it comes to attracting investment into Alberta, it’s multi-pronged,” said Doug Schweitzer. “You make the argument to the businesses, saying ‘Look, we want you to be ain Alberta. We’re more than competitive when it comes to taxes. This is where you need to be. We have the workforce for you, the real estate fits the equation.'”

The minister says this wave of success in the market needs to be taken advantage of to help Alberta diversify its economy.

Keeping pace with the demand

Developers are starting to take advantage of the trend, raising rental rates and being more selective with clients. The analysts say it’s a good sign that Calgary’s industrial real estate market can provide an economic boost.

But capitalizing on that success also relies on having enough construction on the go to offer more space.

Wellwood and Magnussen say that so far developers have been responsive to the increased demand for space, and at this point, they aren’t concerned about meeting demand.

“Usually while we’re in a bit of a space crunch, more space is going to be brought online. There will be a construction boom that we’re already kind of seeing coming out of the pandemic, and the market should stay in balance quite easily,” Wellwood said.

There’s another almost two million square feet of industrial space under construction, most of it in Balzac and Calgary’s southeast end.

And the real estate experts are optimistic about what’s to come for those spaces.

“It’s going to be a snowball effect where we continue to see more and more,” said Craig Hulsman, a vice-president in Colliers’ Calgary’s downtown office division.

“I think that over the next one to three years, we’re going to continue to see substantial growth in warehousing and distribution in greater Calgary and therefore growth in trickle-down sectors as well, like trucking and logistics.”

The minister says more large industrial deals are expected to land by next summer.