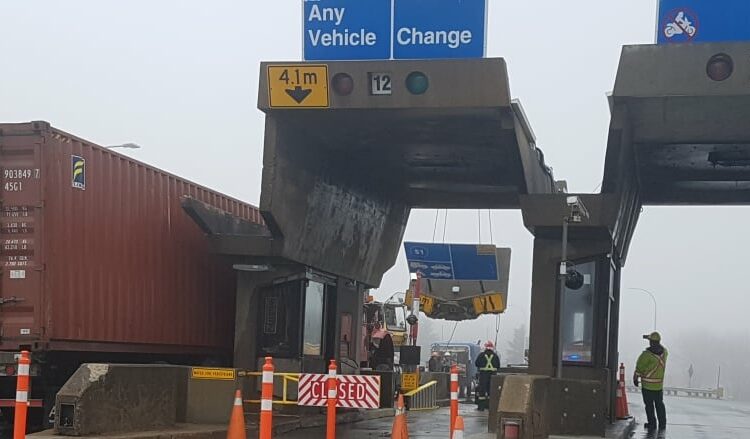 Halifax Harbour Bridges has a plan it hopes will prevent large trucks and vans from crashing into the toll booth canopies on the MacKay Bridge.

Clearance bars, similar to ones that keep tall vehicles out of parking garages, will be installed to warn drivers approaching the toll booths that there’s limited headroom.

While there is already signage at the toll plaza noting height restrictions, it hasn’t stopped drivers from trying to squeeze through the wrong gates.

The latest smash-up happened Oct. 13 when a cube van crashed into one of the concrete canopies.

“Well, we’ve had 18 this year. There were only four last year, so it’s a dramatic increase,” said Steve Proctor, communication manager for Halifax Harbour Bridges.

“We were not sure what’s going on, whether there’s some COVID distraction, whether people are back in their cars and they’re not paying attention in the same way that they did before.”

There are two types of toll gates on the MacKay Bridge: small ones for cars toward the centre of the toll plaza, and larger ones for big vehicles, like tractor-trailers, on the sides. All are covered by thick concrete roofs.

Problems occur when drivers miss the warning signs and try to drive large vehicles through the smaller gates.

And though tractor-trailers occasionally make the mistake, Proctor said it’s usually amateur drivers in rental cube vans — like what happened earlier this week.

“There was a cargo van that got into the wrong lane and it came through. It was coming in too fast into the toll plaza and it collided with the structure and there was … significant damage to the truck. It had to be towed away,” Proctor said.

For the 18th time this year, workers had to do an inspection of the toll structure to make sure there was no damage.

Drivers should hit bar, not booth

The new clearance bars should give drivers plenty of warning. They are expected to be installed in November.

“They’ll be about 10 feet in front of the actual toll booth, so that if somebody is coming in, they’ll hit it,” said Proctor.

“And that’ll probably give an extra 10 feet to understand that they’re not going to make it through that hole.”

He said it doesn’t make sense to remove the concrete canopies at this point. A cashless system based on licence plates is in the works, meaning big changes are coming to the toll plaza.

“If in the not-too-distant future … we’re going to get rid of it anyway, do we want to spend millions of dollars right now to solve a problem that wasn’t a problem last year?” Proctor said.

“This is a good interim step.”