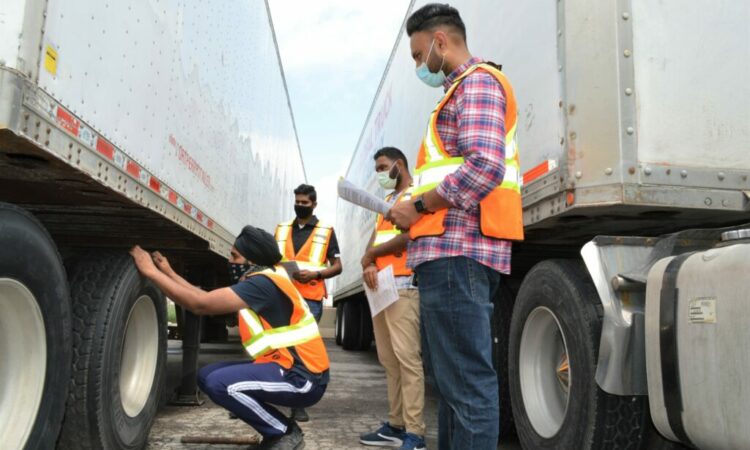 A thorough pre-trip inspection (PTI) will keep everyone safe on the road as winter looms around the corner.

A driver should never compromise on the PTI which should take 25 to 30 minutes, says an Ontario Safety League signing authority.

Rampal Dhillon, who trains drivers on air brakes and dangerous goods and has been in the trucking industry since 1985, says a safe driver is a person who has an in-built quality to learn. “Once they think they know everything, that’s the end of the road,” he says.

Harb Lidder, co-owner of Trilink Logistics in Bolton, Ont. says PTI is vital. “It solves so many problems before the driver goes on the road and keeps everyone safe.” He also emphasizes the importance of a post-trip inspection. “Defects found save everyone’s time,” he says.

Canadian enforcement teams placed 27.2% of inspected commercial vehicles out of service during the international Roadcheck blitz that ran May 4-6, compared to a 20.9% out-of-service rate in the U.S. This statistic is a cause for concern.

Fatal collisions are also sky-rocketing. From Jan. 1 to June 30, the Ontario Provincial Police (OPP) responded to 32 fatal crashes that involved a commercial motor vehicle (CMV), compared to 23 such collisions at this time last year.

Heading into the second half of 2021, 2,956 CMV-involved crashes have occurred, up 9% over 2020 and accounting for close to 13% of the total number of collisions on OPP-patrolled roads this year.

Patience is key to safe driving, says Lidder. “The drivers that keep running around saying ‘give me work’ are the ones that are unsafe. Those running slow and steady are the safe drivers,” he says. Trilink co-owner Jeet Janjua says many new drivers lack patience.

“A professional attitude and positive approach toward work is what makes a safe driver.”

Match your speed to weather conditions, don’t brake too hard, else the truck will jackknife, says Gurbinder Hayer, an owner operator working for Arsh Gill Trucking, in Delta, B.C.

“A professional attitude and positive approach toward work is what makes a safe driver,” Hayer says.

Drivers should inspect their tires regularly and chains should be in good condition during winter. “Plan for extra time to reach your destination, so that in case of delays due to weather and road conditions, you will make your delivery safely and on time,” Hayer says.

He advises drivers to keep extra food and clothing in the truck, make sure your flashlight is charged or have spare batteries. He also carries two phones and two charging cables.

Dhillon says one must drive according to weather conditions. Drivers should be scanning around the truck regularly. “You see some young lads putting a phone on the top of the dashboard and they are watching a movie or are on social media,” he says, adding that such distraction leads to crashes.

Lidder says Trilink conducts pre-winter training sessions for all its drivers. Experts are invited and they provide instruction and tips. The more experienced the drivers get, sometimes they start ignoring safety, he says.

Janjua says the refresher course helps calm drivers down, especially when they sometimes get frustrated on the road.

During wet and snowy conditions, trucks splash a lot of snow, slush, and water. Dhillon advises drivers to slow down and let four-wheelers pass. Never speed up, that could lead to low visibility for car drivers and cause an accident.

Owner operator Hayer says the safe thing to do is stop when the weather deteriorates, and road conditions are treacherous.

“If the conditions are bad, park the truck,” Janjua says. “It’s always better to be safe than sorry.” He says his drivers park, call dispatch and say the weather is bad. Trilink reroutes its drivers or tells them to park in a safe location until conditions improve.

Dhillon says when you see light reflected on the road, it means black ice could be present. “No matter how experienced the driver is, he should turn on his four-way flashers and stop at the nearest safe spot,” he says.

Also pay attention when your trailer is being loaded, Dhillon says. “Ensure the load is secure with a strap or load bar and don’t take things for granted. Perform a visual check,” he says.

Trilink’s Lidder says they have had problems where loads shifted and got damaged at shipper locations. He says drivers take pictures and video of those incidents and they are shown to other drivers, so they can keep an eye out for such occurrences.

As the temperatures drop and the roads get slicker, proper inspections, driving according to conditions, and making the decision to stop when the situation demands, will keep everyone safe and get the freight delivered on time.