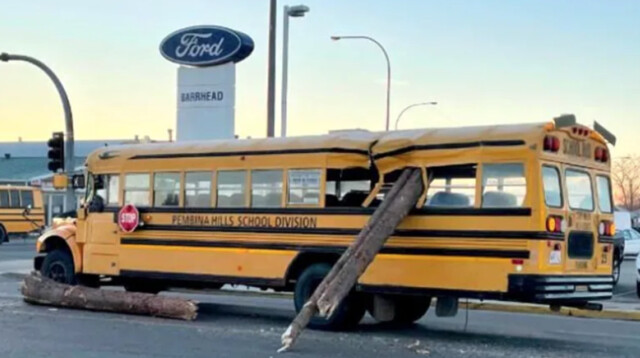 One student was injured after a school bus in Alberta was impaled by a log from a logging truck on Wednesday.

The school bus was struck in Barrhead, 120 kilometres northwest of Edmonton, as it was transporting kids to school.

The B.C. Forest Safety Council issued an alert about the incident Thursday, reminding drivers of safety procedure, relaying reports that indicate overhanging logs on the back of the trailer swung out as it was turning left and struck the bus which was stopped at the intersection.

“The logs went through a window and dislodged some unoccupied seats,” the safety council said.

One student was taken to hospital with a possible concussion, but was not seriously hurt.

“According to RCMP, the driver is facing charges for the vehicle being overweight and improperly loaded,” the safety council said.

CTV News reports the bus had 21 students and two adults on board at the time. The log truck driver was not hurt.