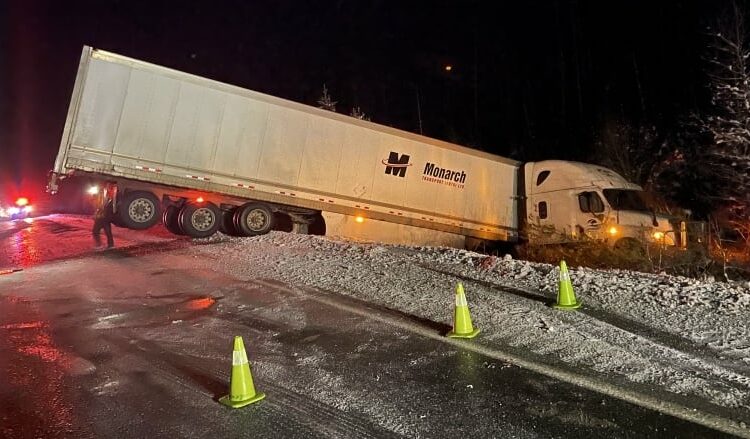 An icy stretch along Highway 93 in Kootenay National Park led to significant traffic tie-ups Tuesday night, with one motorist saying hundreds of cars were at a standstill for several hours.

A stretch of the Trans-Canada Highway east of Golden, B.C., has been closed due to construction, rerouting vehicles to highways 93 and 95.

The closure is part the final phase of a massive, multi-year project to improve the busy mountain highway between Alberta and B.C.

While the latest detour is in place only until Dec. 1, police are urging caution as winter weather is expected to get worse in the weeks ahead.

Earlier in the week, there were two injury accidents along the highway near Storm Mountain.

Police say the significant number of traffic problems have happened due to poor weather conditions.

“We’re asking for the collaboration of the public and again to drive according to the weather, drive according to you skills as a driver as well and make sure to give yourself plenty of space between the vehicles,” said RCMP Cpl. L.P. Gendron-Fafard.

Since Oct. 12, there have been more patrols in the area.

However, Gendron-Fafard says drivers should ensure they have winter tires when making the trip, as well as prepare for the worst by bringing food and cold weather supplies.

Drivers at standstill for hours

One driver who witnessed Tuesday night’s fiasco isn’t so sure the problem is easily fixed — especially since semi-trucks use that route.

Canmore resident Heath McCroy was driving his pickup truck back to Alberta from Radium, B.C., when he noticed increased icy conditions along Highway 93.

He says he eventually became stuck in a long line of vehicles behind the two collisions.

“Because we were all stopped, I got out and stood on the road and actually realized that we were on ice — like serious ice with no gravel. There was no plows or gravel trucks that had been there,” he said.

Police say no one was injured in the accidents; however, people were still affected.

In McCroy’s case, he says the line of vehicles was at a standstill for about four hours along the highway.

“I think it was probably one of the worst, if not the worst [trips I’ve been on],” he said.

“Also, there’s no cell coverage. So you’re kind of stranded not knowing, you know, what’s up ahead of you, what’s up behind you.”

He says he’s lucky he had enough fuel to last the night and that temperatures stayed around zero degrees.

He says the single-lane highway makes it a dangerous site, especially due to the possible difficulty emergency crews and police might have trying to get through.

“I’ve driven that road many times for years. It’s totally fine, but I don’t think it’s built for semi-trucks in the winter,” he said.

“I just think all it takes is one accident in the wrong place and you’ve got a lineup.”