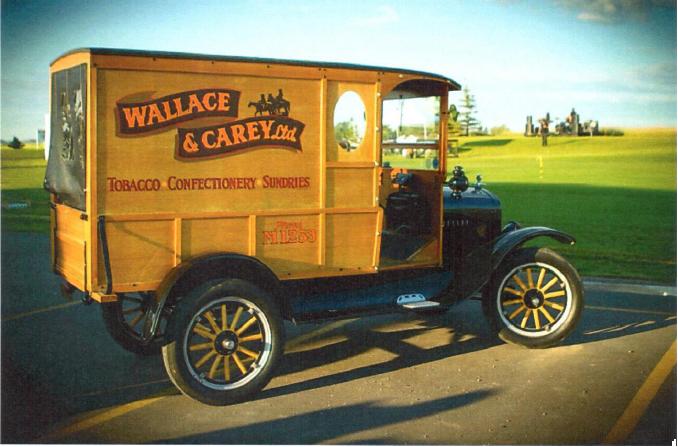 For Calgary-based distribution company Wallace & Carey, its 100th year in business has also been among the most challenging. From fires that ravaged the B.C. Interior, to flooding that would later cut off Wallace & Carey from its B.C. customers, to the ongoing Covid-19 pandemic that would shutter for periods of time a large segment of its customer base, it’s been no easy time to navigate.

“Yes, I would characterize our 100th year to be among the most challenging in our history in some respects,” company president Dan Elrod said during an interview with Today’s Trucking. “Although when a company has persevered through two World Wars, a Great Depression, and countless other times of crisis, it’s hard to pinpoint one particular event.”

The company distributes more than 7,500 items ranging from groceries to tobacco products, sundries and cinema confectionaries, to gas stations, retailers and movie theatres. About 18% of its top line revenue was generated from delivering to cinemas from its 10 distribution centers across Canada. Then Covid-19 arrived, and that revenue stream evaporated.

But through some nimble maneuvering on the fly, the company has grown its newly launched freight business by 400% since 2019, while managing to keep the core distribution business flat, despite the temporary loss of the theatre revenue. This has made for a celebratory centennial year after all.

Elrod, who has served as president for the past three years, has been responsible for steering the company through the pandemic, and more recently, catastrophic floods that have cut it off from its B.C. customers.  He was lured out of retirement by friends in the co-founding Carey family in 2018, and couldn’t have imagined what would be in store as the company approached its 100th year in business.

“The core of the business remains grocery distribution to convenience stores, supermarkets and other facets of the trade,” he said. “We’ve only expanded our trucking and longhaul business over the past four to five years.”

Launching a longhaul subsidiary was necessary to take greater control over the supply chain and eliminate service issues with contract carriers, Elrod explained.

“We were paying a lot of companies over the years to move that freight from distribution center (DC) to distribution center for us and I started looking at it in 2018 and seeing the demand coming at us,” Elrod said. “Rather than paying somebody to move that freight from DC to DC for us, in early 2018 we decided to take it over ourselves. The other factor was, I buy from the biggest CPG (consumer packaged goods) companies in the world. When I can take over that piece of the business – moving from their factories to my DCs – I can not only control costs better but can also control the timing of the freight and my own receiving. Frankly, on-time service is horrendous these days. Our on-time inbound was in the 70%s, where I have to run on-time delivery rates in the mid-90%s for my customers. Our third-party dependability wasn’t that great.”

The greatest challenge in launching the longhaul subsidiary, known as RET Logistics, was figuring out how to attract a different breed of driver. Drivers within the core fleet average about 12 to 15 stops a day using five-ton trucks. Drivers who hustle earn the same pay whether they finish their route in 10, or six hours.

They’re also given the opportunity to work overtime.

“To the extent the laws allow, drivers can work as much overtime as they can take and want. It really is, to put it simply, a good job for drivers,” Elrod said. “Once they get here, they don’t leave.”

Driver retention at the company averages about 88%, and for one quarter last year measured 92%. But attracting longhaul drivers is more difficult.

“Getting more of the longhaul drivers recruited when we’re not a name out there, not someone people recognize,” Elrod said of the challenge. The longhaul division runs 25 trucks and 45 trailers and is currently running as a break-even entity. But even so, the advantages of having better control over the supply chain have made the decision worthwhile, Elrod added.

To further appeal to longhaul drivers, the company is currently investigating the viability of offering them a salary. It sees more business opportunities coming down the pike. For example, its experience delivering high-value tobacco loads to retailers makes it ideal for transporting cannabis, Elrod noted.

To achieve the growth he envisions, Elrod realizes the labor issues must be overcome. He’s actively working with various associations to try to attract more women, and the company refers to its drivers not as drivers, but as the friendlier term, “teammates.”

The new division also brings technological challenges, such as the need to install electronic logging devices and telematics.

“We are very much in need of the data analytics on the fleet side of our business,” he said. The company has chosen an ELD supplier but it’s not yet certified for use in Canada, adding to his angst as hard enforcement date approaches next June.

In the core distribution business, Wallace & Carey is on top of technology. It has developed proprietary warehouse management systems. The company doesn’t just serve as an intermediary; it owns the product it sells, buying it from the manufacturer and then selling it to the retailer.

But all the technology in the world wasn’t enough to keep the Covid-19 pandemic from disrupting the business, as well as the entire economy that drives it. Elrod is extremely proud of how the company has navigated those challenges.

“The results the company has had and how we as an organization have handled the pandemic to this point has been absolutely amazing to me,” he said. “From Day 1 we put in very stringent protocols and had extensive and immediate training with all management staff, understanding that 90% of our drivers throughout the pandemic were walking into 12 to 15 retails stores a day. I didn’t sleep a lot through the pandemic. If we had our operations shut down, we were out of business, that was it.”

“My fleet managers know the one thing they don’t do is put drivers in harm’s way, we don’t do it – period.”

The company also found some positive ways to come together through the ordeal. It more than doubled its social media audience through improved engagement, and it had its first driver appreciation week in 2020, which has become an annual tradition.

But even before the pandemic has finished wreaking havoc, another disaster struck. The B.C. floods earlier this month cut the distributor off from many of its customers there.

“I’d say a good 30% of my business in in that province,” Elrod said of B.C. “We run product across the prairies out to [Vancouver] Island. All the challenges we had in the summer associated with the fires, you throw this on top – not being able to get across the mountains in the near future – it’s going to be a challenge to meet our sales budgets over the next three to four weeks without a doubt.”

For now, the company is doing whatever possible to meet customer needs, including flying product into the affected areas.

“We’re right in the middle of it. One of our largest customers is 7-Eleven. We deliver to all the 7-Elevens in Canada. It’s tough. My fleet managers know the one thing they don’t do is put drivers in harm’s way, we don’t do it – period. That has to be balanced with customer service. There’s no product flowing right now. When we get out there, stores are out of stock and if you’re a retailer, that’s not a workable situation. We’re trying to find creative ways. We flew in some product to our distribution centers – everything that can possibly be done within reason and also within the rules.”