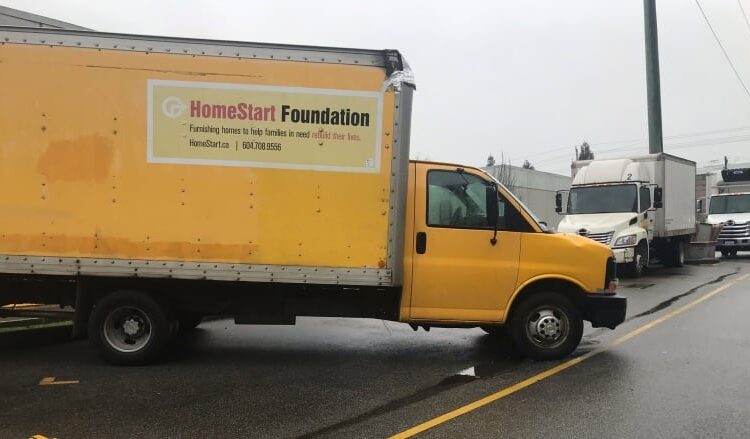 A Vancouver-based furniture bank says it is frustrated and worried about its future after the catalytic converter on its truck, used to deliver furniture to homes in need, was stolen for the second time since May.

“I heard this horrible sound come from the back of the building. I’ve heard that sound before. And I thought it can’t be our truck again,” said Vikki Stevenson, executive director of the HomeStart Foundation which collects and delivers gently used furniture to homes in need.

A catalytic converter is an exhaust-system filtering device that converts pollutants to less toxic materials before they are emitted from the tailpipe.

The charity says it was planning to help get families settled in before Christmas, but the theft has had a significant impact since the bright yellow truck is their only delivery vehicle.

“The second time almost feels personal, because you think our truck is big and yellow, and it says charity and helping families on the side of it. It’s pretty obvious. And it just shuts us down.”

Stevenson is concerned about the repair time to get the truck running again.

In May, the charity was without the truck for six weeks as the replacement part took weeks to come in. It cost the charity about $1,500, says Stevenson.

Catalytic converter thefts on the rise

The part is appealing to thieves for the monetary value of its precious metals such as rhodium, palladium and platinum. It can be stolen for its resale value or sold to a recycling facility, according to RCMP.

According to RCMP, thefts are up due to a significant increase in the price of precious metals.

The website for Montreal-based Kitco Metals, which buys and sells metals and also reports on market trends, shows an ounce of platinum is currently selling for $1,205, while palladiumis selling for $2,259 an ounce.

Replacing a catalytic converter, including installation by a mechanic, can cost $2,000 or more, according to RCMP.

‘It’s going to be really hard’

Stevenson says while the charity has reported the theft to the police and ICBC, she’s concerned the truck will not be ready before the new year to support families for the holidays.

The truck delivers to roughly 40 homes in a normal month, says Stevenson.

In the meantime, she says, the charity is looking into a rental vehicle. However, this will only cover them for about 20 days.

“So it’s not going to cover us. It’s going to be really hard and we’re a small organization. So this hits hard. And it messes with our carefully planned schedule to get to everybody before the holidays,” she said.

Police have repeatedly warned about catalytic converter thefts advising residents to report any grinding noise or what may sound like an electric saw if they see suspicious activity by a vehicle.

To avoid this type of theft, ICBC says it is important to park vehicles in a well lit area, a garage or locked compound overnight.