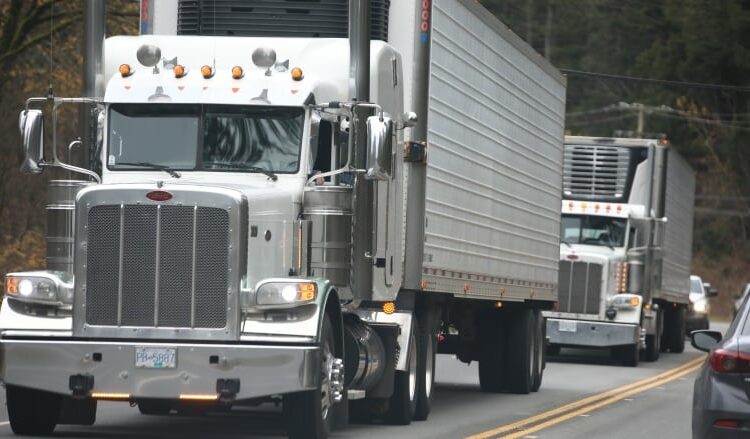 Recent crashes on highway are ‘the worst I’ve ever seen in my life,’ Princeton mayor says

B.C.’s transportation minister is among those concerned by dangerous driving on the only open route for freight trucks connecting the Lower Mainland with the rest of Canada.

At a news conference Monday, Rob Fleming noted that Highway 3 is the lone corridor that trucks can still use to get between the Lower Mainland and the B.C. Interior since storms, flooding and landslides put other key routes out of commission. It’s also open to other vehicles for essential travel.

He’s concerned, however, that poor driving could lead to closures on the route.

“We’re still seeing too many accidents … and we need that situation to improve,” Fleming said. “We need all drivers to slow down, be patient and drive to the unique conditions of this route.”

A local mayor, police and voices from within the trucking industry are calling for drivers to be more careful, as well.

Princeton Mayor Spencer Coyne has had a front row seat to the situation on Highway 3, which passes through his community.

“The accidents, I gotta say, are the worst I’ve ever seen in my life,” Coyne said.

He says much of the problem lies with truck drivers used to travelling the now-closed Coquihalla Highway at a much faster clip. Now they’re forced to adapt to Highway 3, which, he describes as “a road with sharp corners like a whipsaw.”

He believes the tight timelines truck drivers are working under add pressure to drive quickly.

“You just gotta slow down and treat the mountains with respect and you’ll get there,” he said.

Cpl. Mike Halskov with the RCMP’s B.C. Highway Patrol says police have stepped up their presence on Highway 3.

He said a number of tickets have been written but couldn’t give an exact figure.

Shelley Walker, CEO of the Women’s Trucking Federation of Canada, says all drivers, especially those unfamiliar with the route, need to remember it’s “not the most truck-friendly highway.”

“It’s very stressful for drivers,” Walker said. “For a lot of them, they’ve never been on that road.

“This is the route we have to take, so we all need to learn to play nicely and drive to conditions. It’s going to be a long winter.”

Dave Earle, CEO of the B.C. Trucking Association, said there needs to be better training for truck drivers.

“We continue to be plagued with problem operators,” Earle wrote in an email.

Fleming said the province has tried to alleviate some of the safety concerns on Highway 3 by issuing detailed maps for drivers who might be unfamiliar with the road.

Signage warning of steep and winding conditions has been implemented, Fleming said, and winter road maintenance has been enhanced.

Fleming said he couldn’t say if Highway 3 will also open to non-essential travel later in December.

“For now, the safest way to have it continue as a priority for our supply chain and our economy and making sure communities have the goods that they need is to keep the travel orders in effect and prioritize commercial trucks,” the minister said.