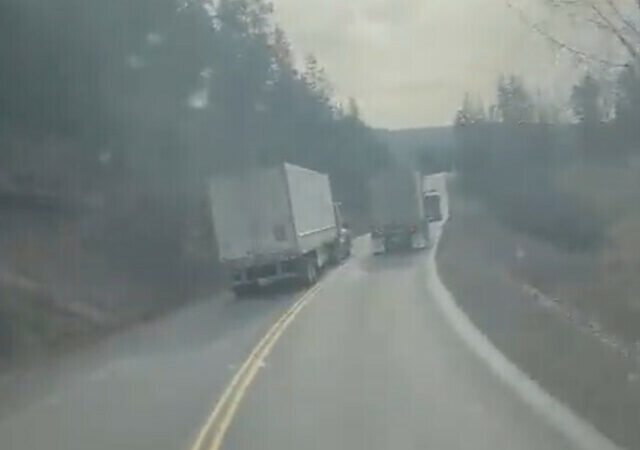 A trucking company has been suspended from operating in B.C. after dashcam footage showed a driver making unsafe passes on double-solid yellow lines on Highway 5A.

During a Monday news conference to update the province’s flood recovery plan, Transportation Minister Rob Fleming said there is zero-tolerance for unsafe driving on Highway 3. Highway 3 is currently the only connection for commercial vehicle traffic between the Lower Mainland and the southern Interior, and 5A links Highway 3 to the Okanagan Connector.

“I’m sure that many of you saw that recent dashcam footage on the 5A, where a commercial truck was dangerously passing another truck on a double yellow line. That company I can tell you today has had its license to operate in B.C. suspended. While the CVSE will continue its investigation and its audit of the company, that evidence has directly led to a suspension,” said Fleming.

The company has been identified as YWC Transport Ltd, confirmed a ministry spokesperson.

Fleming announced that the RCMP has issued 116 speeding tickets on Highway 3 so far in December. Police and CVSE have stepped up patrols on the truck route.

However, the minister also made it clear that the vast majority of truck drivers are following the rules.

“They are safe and responsible. They are professional and we depend on them to deliver the products we need, and no one is more safety conscious than the BC Trucking Association, who has been an absolutely invaluable partner in helping us reestablish supply chains that keep British Columbian store shelves stocked and keep small and medium-sized businesses in every community operational.”

“Instead of having layoff notices at Christmastime for interrupted supply chains, those tens of thousands of trucks that have been able to use Highway 3 have kept people employed and working and being able to enjoy the holidays with their families,” concluded Fleming.

Correction: A spokesperson for the Ministry of Transportation has corrected earlier information given to Castanet that identified a different trucking company. The spokesperson now says the company the minister was referring to in his comments is YWC Transport Ltd.