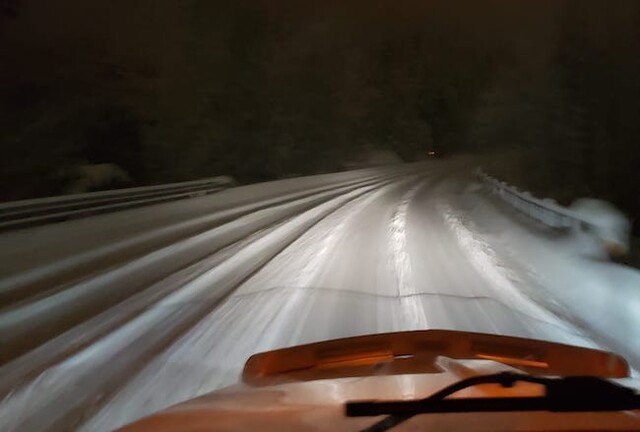 B.C.’s Ministry of Transportation says it continuously monitors the performance of maintenance contractors to ensure high standards are met.

But a Vernon truck driver begs to differ.

Kevin MacGillivray was driving the Trans-Canada Highway towards Alberta last week, and in a Facebook post later that day wrote that conditions on the privately contracted section east of Revelstoke were markedly worse than on the Parks Canada maintained section though Glacier National Park at Rogers Pass.

“Time for the provincial government to end the failed experiment of highway maintenance privatization and make the roads safe again,” MacGillivray wrote.

He took the journey in the pre-dawn hours of last Tuesday and said there was about 15 centimetres of snow on the highway heading out of Revelstoke and no plows in sight. But only about 50 kilometres away at the high-elevation Rogers Pass, he says Parks Canada crews had the highway in much better shape.

“Rogers Pass, snowing harder but Parks Canada on top of it,” he wrote.

Lastly, he shared a photo of a crashed semi in the ditch near Albert Canyon with the caption: “the results of private contracts.”

MacGillivray says the highway “was just the sh**s” and he was driving at 30 km/h on bumpy, packed ice that hadn’t been plowed.

It took several days to get a response from the ministry, but it said it is “aware of concerns with highway maintenance in this service area.”

The area in question is maintained by Emcon Services.

“Highway maintenance is one of the most important services provided by the ministry’s contractors. The ministry and its maintenance contractors continuously monitor weather forecasts and current conditions to determine how to best treat roads and protect travellers,” the ministry said.

“The sections of Highway 1 that Parks Canada maintains are at a different elevation and can experience different climatic conditions than the adjacent provincially maintained sections. This can make for more challenging winter conditions on either side of the park’s boundaries, depending on the conditions.”

The ministry added when a contractor does not meet performance expectations, it is required to determine the root causes and create an action plan to ensure it does not occur again.

“Ministry staff are working closely with the contractor to ensure concrete actions are taken and the contractor is able to meet contract specifications in all areas going forward.”

Overall, Emcon has been meeting contractual standards along the Highway 1 portion of its contract, the ministry added.

If drivers have a concern with maintenance between Revelstoke and Alberta on the Trans-Canada, they can contact Emcon’s 24-hour line at 1-866 353-3136.

Motorists are encouraged to be prepared before travelling and check DriveBC prior to heading out.

“Private contractors are for profit. The only way to maximize that is to cut costs,” he said.

The problem is not unique to Emcon, he adds – “I’ve seen it all over B.C.”

MacGillivray says he drives the Trans-Canada daily, and the conditions are “never really great” in the winter.

“Every time it snows, there’s vehicles in the ditch.”

“People want to pass the trucks because we’re not going fast enough for them. They fill the hole in front of me, but they forget I can’t stop nearly as fast as they can.”