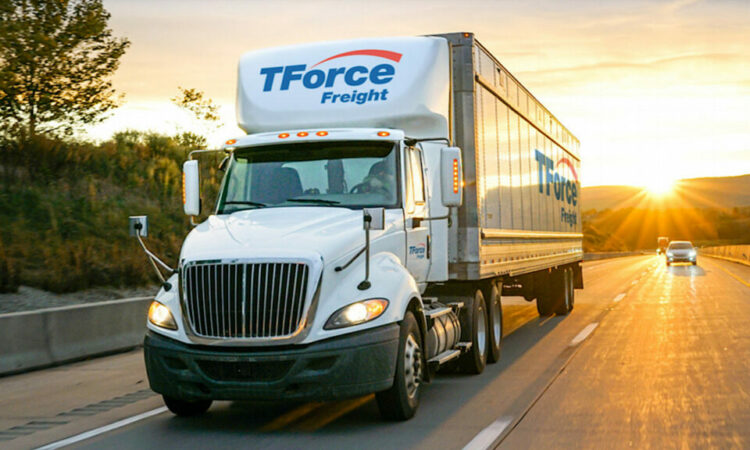 If a return to normalcy was what you were hoping for this time last year, then 2021 probably didn’t deliver on your wishes. In fact, it was an unprecedented year for the Canadian trucking industry in many different ways.

The Covid pandemic continued to have a major impact on the trucking industry and pushed global supply chains to the limit. Beyond the limit, in some cases. But despite those challenges the trucking industry’s innovation marched ahead undeterred. Electric trucks took a giant leap forward in 2021, and the first automated delivery vehicles hit Canadian roads.

Here’s a look back at one of the most interesting, dynamic, challenging, profitable (take your pick) years in the industry’s history.

Covid-19 put a damper on merger and acquisitions (M&A) activity in 2020, when few sizeable deals were made. But by the time the calendar turned to 2021 dealmakers had seemingly figured out how to negotiate by Zoom and conduct site visits while masked up.

The year began with household name Bison Transport being snapped up by James Richardson & Sons. TFI International made a bold push further into the U.S. by picking up UPS’s break-even freight division, UPS Freight. Renamed T-Force Freight, by the end of the year TFI International has already significantly improved margins there by right-sizing the fleet and re-evaluating its freight profile.

Titanium Transportation also found the “transformative” acquisition it had been looking for when it purchased Belleville-based ITS, essentially doubling its size in one fell swoop.

Mullen Group, quiet in 2020, also got busy, buying APPS Group and Bandstra Transportation. It also made a push into the U.S. buying 3PL QuadExpress, which has been rebranded as Haulistic. All three publicly traded companies saw their acquisitions push them to record quarterly revenues in 2021.

You could say 2021 was the year the supply chain became top of mind for everyone, business leaders and consumers alike. Everyone was touched by the global supply chain crisis in some way, but none more so than trucking company leaders looking to grow their fleet to meet surging freight demand.

Truck and trailer OEMs were unable to meet demand for new equipment, as many parts – most notably semiconductors – were at times nearly impossible to procure. This was a blessing and a curse for truckers. It was on one hand difficult to meet customer demands, but the shortages also kept a tight lid on capacity, pushing rates higher.

Truck OEMS dealt with the crisis in various ways, some halting production lines while others continued to produce trucks then park them until the needed parts arrived. Fleets of all sizes reported difficulty getting build slots in 2021 and no one can say with certainty when the supply chain challenges will be alleviated.

An ELD mandate…with no ELDs

June 12, 2021 came along and with it a legal requirement for federally regulated carriers to operate using third-party certified electronic logging devices (ELDs) in Canada. One problem. No such certified products existed in the marketplace, making compliance impossible.

Enforcement was deferred until June 2022, and the list of Transport Canada-approved devices has since grown to a dozen as of this writing. Fleets that have been putting off choosing a vendor and installing devices should by now have had serious discussions with suppliers about their ability to meet the Canadian certification requirements before enforcement begins in June.

A shot in the arm

As Covid vaccines became widely available, it was still far from easy for over-the-road truckers to schedule an appointment. The trucking industry in several parts of the country took it upon itself to get truckers vaccinated.

Manitoba, Saskatchewan and Alberta made arrangements with their neighboring states to get cross-border truckers vaccinated at roadside clinics. More than 2,500 Canadian truckers were vaccinated through a partnership between Manitoba and North Dakota, which was extended to drivers from Saskatchewan. Alberta partnered up with Montana to do the same.

While Covid-19 dominated 2021, technological progress was not put on lockdown. The development of electric trucks continued and there were some notable deployments in Canada. Bison Transport took delivery of two Freightliner eCascadia’s and interestingly, deployed one on a cross-border route from Southern B.C. into Washington State.

Loblaw also deployed an eCascadia, and several other Canadian fleets placed orders for Class 8 electric trucks. On the lighter side, Day & Ross took on a Lion6 box truck, and Gardewine tapped provincial funding for a LoneStar EV shunt truck.

On the manufacturing side, Quebec-based Lion Electric announced plans to build a plant in Illinois capable of producing 20,000 electric vehicles a year, as well as a battery plant in Quebec. The march toward emissions-free transport went on unabated in 2021.

Looking further ahead, hydrogen fuel-cell-electric trucks will be required to meet longhaul requirements, and Canada is positioning itself to be a global leader in clean hydrogen development. B.C.-based Hydra Energy landed its first paying fleet customer in Lodgewood Enterprises, which committed to deploying a dozen units.

These are diesel-hydrogen retrofit units that can reduce diesel emissions by 40%, Hydra claims. It is deriving its clean hydrogen through a partnership with chemical producer Chemtrade, which produces hydrogen as a byproduct.

In Alberta, Bison Transport and Trimac will put to the test hydrogen fuel-cell-electric trucks as part of the Alberta Motor Transport Association’s AZETEC project, which has been delayed due to Covid-related disruptions.

The first automated trucks hit Canadian roads in 2021. Loblaw partnered with Gatik to deploy automated delivery vehicles on “the middle mile,” or between an automatic picking facility in the Toronto area to five retail locations.

The five trucks deployed in January continue to operate with a safety driver on-board. Meanwhile, Canadian Tire invested a million dollars into deploying automated trucks provided by NuPort Robotics. The trucks are transporting goods between a Canadian Tire distribution center and nearby rail terminals. As with the Gatik units, a driver continues to be in the cab at all times.

The driver shortage has been an issue nearly every year in recent memory, but it reached new heights in 2021. Trucking HR Canada reported Canada had a shortage of 18,000 drivers in the second quarter of 2021. In the U.S., the driver shortage was the top issue on the minds of trucking executives, according to an annual survey by the American Transportation Research Institute.

The American Trucking Associations reported the U.S. driver shortage reached a new record in 2021, at 80,000 unfilled positions. If nothing changes, the ATA predicted it will double to 160,000 by 2030.

A shortage of qualified drivers was exacerbated by trends stemming from the pandemic. Early retirements. Drivers pursuing local delivery jobs that offer greater flexibility. A lack of new entrants due to the temporary closures of driving schools and licensing agencies. And add to those, a new drug-and-alcohol clearinghouse in the U.S. that sidelined about 70,000 drivers for drug and alcohol test failures.

Fleets desperate for drivers have been increasing rates. One U.S.-based company even added a “driver shortage surcharge” to its invoices, with those funds collected going directly to the driver hauling the load. As we head into 2022, there continue to be many uncertainties. But the safest bet of the year will be that the driver shortage will again be one of the most defining issues of the year ahead.