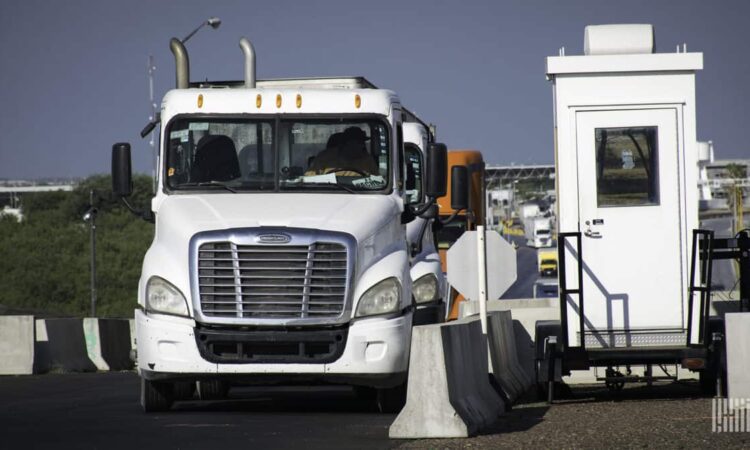 Protests similar to those at US-Canada border have not materialized

New York-based Nuvocargo is a digital logistics platform for cross-border trade between the U.S. and Mexico. The company has offices in Mexico City, where Blanco is based.

“In the Mexican press, there hasn’t been much talk about an anti-vaccine sentiment that you have in the U.S., with protests on the streets,” Blanco told FreightWaves. “I think the predominant sentiment is, ‘When vaccines get here, I’m excited that I get a spot for a vaccine.’ … I think that really represents the difference between the Latin American mentality versus the American mentality with vaccines.”

Luis García, Mexico City-based head of carrier relations at Nuvocargo, said he hasn’t heard of any protests or dissent from Mexico’s trucking industry regarding the vaccine mandate.

“From my perspective, carriers [in Mexico] have been thinking more about this proactively, communicating about some delays we’re experiencing given the reduced capacity because of drivers being out sick,” García said. “I would say that shippers are more concerned right now with how this impacts them in terms of times to deliver their merchandise, rather than the actual [vaccine] regulation itself.”

According to data from Mexico’s Ministry of Communications and Transportation, there are more than 184,774 trucking companies with permits to operate in the country, with most having 20 trucks or fewer. There are currently 3,753 medium-size trucking firms (31 to 100 trucks) in Mexico.

Jordan Dewart, a managing director for Redwood Mexico based in Laredo, Texas, said one of the reasons for less disruption could be that the vaccine mandate affected a smaller percentage of drivers in Mexico compared to Canada.

“It’s a different mechanism of crossing the border in Laredo, where you don’t have a lot of Mexican long-haul drivers crossing the border into the United States for the transfer, rather we use crossing carriers to dray the trailers across the border,” Dewart said. “What we have seen is a huge rise in B-1 visa drivers. They will pick up freight just on the Mexican side of the border or Laredo and then cross into the United States and go on. It’s a much smaller network of drivers that had to get vaccinated.”

The protests in Canada began over COVID-19 vaccine mandates, with truck drivers calling themselves the Freedom Convoy converging around the Canadian Parliament in the capital of Ottawa, Ontario, on Jan. 22.

There were some delays at the U.S.-Mexico border when the mandate went into effect Jan. 22, Armando Taboada, assistant director of field operations for U.S. Customs and Border Protection (CBP) at the Laredo Field Office, told FreightWaves.

“We were capturing the numbers the first few days to give us an idea,” Taboada said. “For the most part, I believe the carriers got the message that vaccine requirements were being enforced.

Dewart said more delays are being created by a trucking capacity crunch, which has been an issue at the U.S.-Mexico border for several years.

“There are actually a lot of delays at the border right now, but they are not related to COVID-19, or driver vaccinations,” Dewart said. “It’s more related to the availability of crossing carriers, because there’s so much volume and just not enough drivers to move the cargo.”

Dewart said shippers should expect the capacity shortage to continue at the border for the foreseeable future.

“You’ve got a steady flow of northbound cargo coming out of Mexico, but it’s always been a challenge because a lot of the southbound [trucks], there’s not enough,” Dewart said. “What could be done to fix it? The government needs to expand the B-1 visa driver program; that’s really saved us in the last few years, the rise of these companies.”

Dewart said many trucking companies offering border transfer services have grown significantly in recent years, “picking up the slack from all the exits of the large players.”

“The only way that they’re able to do it is by adding drivers through the B-1 driver program,” Dewart said.