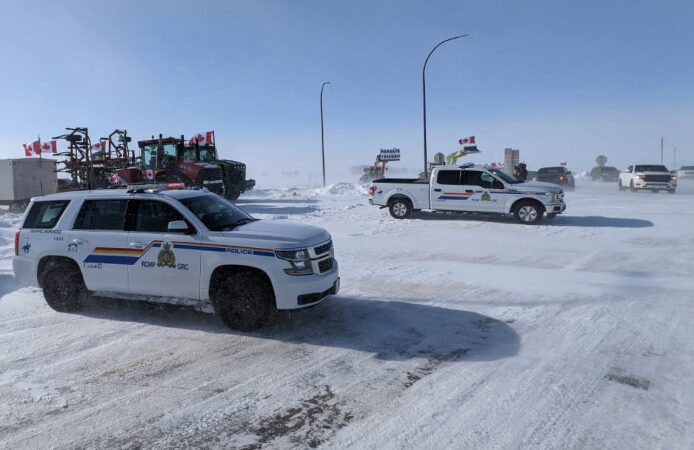 Overall cross-border truck traffic plunged in early February as a series of border blockades emerged in the fight against pandemic-related restrictions.

Protesters blocked the Ambassador Bridge in Windsor, Ont., from Feb 5-13, disrupting $390 million in daily trade and causing several automakers to pause production because of limited parts inventories. Police broke up that blockade after Ontario declared a state of emergency and a court injunction was issued Feb. 11.

Another blockade in Coutts, Alta., ran Jan. 29-Feb. 14, and ended shortly after RCMP seized multiple weapons and body armor from one group of protesters. That sweep led to 11 arrests, while another two protesters were arrested after a truck accelerated into a police check stop north of Milk River, swerving at the last minute.

A blockade in Emerson, Man., lasted from Feb. 10-16, but came down without arrests. That crossing typically sees $73 million in trade per day.

The Pacific Highway border crossing in Surrey, B.C., saw its second blockade in as many weeks this past weekend, while short-term protests have also appeared in Sarnia and Fort Erie, Ont.

Emerson had been home to some of the first protests that emerged after Canada began to impose a vaccine mandate on border-crossing truck drivers as of Jan. 15. That rule was mirrored a week later by the U.S.

The so-called Freedom Convoy that converged on Ottawa, occupying the nation’s capital for three weeks, was initially established under the guise of fighting the vaccine mandates before expanding into demands relating pandemic-related restrictions overall.

But the vaccine mandates themselves appeared to have little effect on the numbers of truck drivers who crossed the border.

While fewer truck drivers crossed the Canada-U.S. border in the week after Canada’s new vaccine mandate was imposed, the drop was in line with a general reduction in overall traffic.