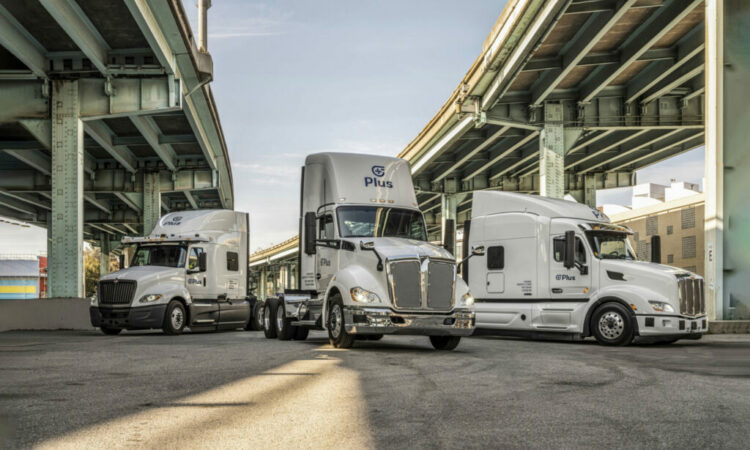 Autonomous trucks aren’t being designed to replace professional drivers, but to take away the more dangerous and boring parts of the job and improve their lifestyles. That was the shared opinion of speakers at a Truckload Carriers Association convention executive panel held today.

“If you are entering the trucking industry now, you’ll be able to retire a trucker if you want to,” Wiley Deck, vice-president of government affairs and public policy for Plus said.

Charlie Jatt, head of commercialization for Waymo’s trucking business, agreed: “When we overlay the data of our planned rollout with the growing need for drivers, the need for drivers is growing faster than deployment of autonomous technology will be.”

The companies represented on the panel at are various stages of development, but none are claiming autonomous trucking will be commercially viable in a wide range of applications anytime soon. Instead, it’ll be a gradual transition beginning with hub-to-hub routes and rolling out from that as the technology matures.

“Most of what you’re seeing on the road today are testing operations, with trained test drivers behind the wheel helping engineers develop the system, sometimes carrying real freight,” Jatt said. “We are still early in the research and development and prototype stages but on the cusp of seeing more commercial deployment.”

Most systems being worked on today are SAE Level 4, meaning the truck can be operated without a driver, explained Dima Kislovskiy, Aurora’s vice-president, truck program. Level 2 autonomy offers driver assistance tools such as lane-keep assist, adaptive cruise control, and lane centering. Deck says no one is focused on Level 3 autonomy – which automates most driving but requires a driver to take over at a moment’s notice – as it’s difficult to keep the driver engaged and there’s little work to move from Level 3 to 4.

Improving road safety is the most important benefit of autonomous trucking, panelists agreed. Truck crashes in the U.S. cost about US$30 billion a year, not including skyrocketing insurance costs, said Jatt. He noted test drivers have at times wondered why the truck chose to change lanes for no apparently reason, only to soon after come upon a stopped vehicle that the driver had no way of seeing so far in advance. Deck said advanced driver assistance systems available today, such as automatic emergency braking, can reduce rear-end collisions by 65% and the severity of those collisions by 90%.

Kislovskiy agreed, noting the majority of truck crashes are caused by driver fatigue, error, or distraction, which can be eliminated through autonomous trucking.

When asked about government policies regarding autonomous trucks, panelists agreed it’s a patchwork of rules by jurisdiction. Texas, Florida and Arizona, for example, are progressive in allowing on-road testing. California, New York, and other states are more cautious, noted Deck. He said at some point the Federal Motor Carrier Safety Administration may have to intervene with federal regs that will pre-empt state rules, in order for the technology to be rolled out in interstate commerce.

“It’s easy to overregulate something we don’t yet understand fully,” he said. “This technology is still really in development.”

He said responsible companies developing the technology should be able to self-police and ensure the safety of road users. Deck agreed, adding “if you have an outside entity establishing a test, you can program the vehicle to perform to the test.”

Asked how autonomous trucks will be able to manage the “1%” of situations drivers don’t see every day, but on occasion, panelists said the machine learning continues to be developed to take all possible scenarios into consideration.

Jatt said data is being collected from so many vehicles that developing an autonomous driver is not like teaching a 16-year-old with no driving experience how to drive. “These 1%er cases we all see and run into, you solve them one by one. The artificial intelligence and machine learning kicks in and can learn from all these scenarios and just get better and better,” he said. Jatt added Waymo studied several decades of traffic accidents in the Phoenix, Ariz., area where its autonomous cars are deployed, and simulated every single one until it found the right response to prevent the crash.

In doing so, Jatt said the company is building the most experienced driver possible.

But what about severe weather conditions? What would an autonomous truck do in situations where lane markings are not visible? Jatt admitted developers are starting in areas with ideal climates, just as you would teach a new driver how to drive in ideal conditions. At Plus, Deck said the company has an SAE Level 2 system fleets can purchase today, that’s out there running in all kinds of weather conditions as a means to collect data that will be fed into its Level 4 system.

And, he added, “If you can’t see the lane lines when you’re a human truck driver, you shouldn’t be on the road, you should pull the truck over.”

Who will be responsible in the event an autonomous truck is involved in a crash? There were differing opinions on that. Deck said, “Everybody. That’s the easiest answer to that. That’s who the trial attorneys will go after.” He said the technology provider, truck OEM, and motor carrier will all be pursued.

He added OEMs may even decide not to allow their autonomous truck offerings to operate in certain highly litigious jurisdictions. “If I were an OEM, I’d have real reservations about controlling where those vehicles are allowed to be operated,” he admitted.

Jatt disagreed, saying Waymo will take full responsibility for the performance of its technology, assuming the fleet has properly maintained and operated it.

There’s also no simple answer to how autonomous trucks will manage the extra-curricular duties of the professional driver, for example, laying out triangles or flares when broken down at roadside. Who will deliver the bill of lading when a load is delivered? How will coupling and uncoupling, or fueling be managed? Who will supervise the cargo if a thief puts something in front of the truck to stop it in its lane, then raids the trailer and steals the cargo?

“There are questions that haven’t been answered,” Deck admitted.