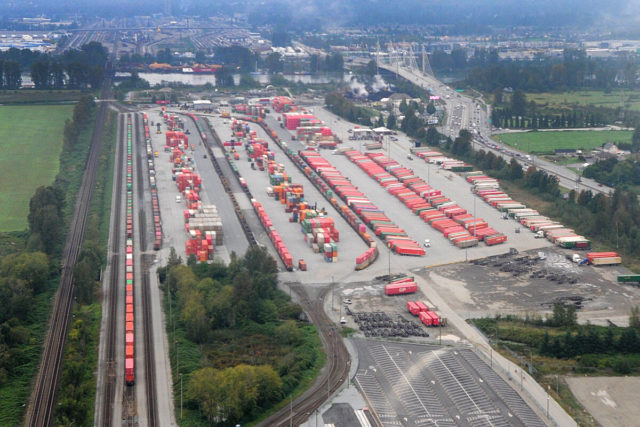 Trucks will now be detoured along Airport Way and Ford Road

The City of Pitt Meadows has suspended truck access to the intermodal facility on Kennedy Road due to the Canadian Pacific ongoing labour dispute.

CP employees began picketing across the country on Sunday, March 20, including those at the Vancouver Intermodal Facility in Pitt Meadows. At issue for the workers are wages, pensions, and working conditions, “that call into question the railway’s capacity to recruit and retain workforce members,” according to the union, Teamsters Canada Rail Conference, that represents 125,000 Canadians, 16,000 of whom work in the rail industry.

The city put out a message warning truckers and residents that due to the dispute truck access to the intermodal facility, located on Kennedy Road, just south of Lougheed Highway, would be suspended at 7 a.m. on Monday, March 21.

Trucks will now be detoured along Airport Way and Ford Road.

“This detour is in place to ensure that truck congestion does not back up onto the Lougheed Highway,” read the notice.

However, some residents showed concern.

“So instead of trucks blocking a highway, they are now going down the farm roads where corners are tight and sight lines are blocked by tree’s [sic] and overgrown ditches??” replied Joe Keno online. “Not to mention businesses down Ford Road, and local residents. Last time this happen(e)d you couldn’t even get out of your driveway. Wake up City of Pitt Meadows.”

Kailea Skye reached out to City of Pitt Meadows Mayor Bill Dingwall to tell him that detouring trucks in this way is not a better alternative.

Anthony Goncalves mentioned he would like to see someone at Lougheed Highway and Harris Road making sure truckers are not turning south along Harris.

“So were going to have a line of trucks sitting on kennedy [sic] for a while? If access to lougheed [sic] is interrupted from Kennedy by truck traffic for an extended time, is it possible to get some flaggers to ensure residential traffic can get through,” asked Dave Pitt.

Local traffic will continue to be permitted southbound from the Lougheed Highway and Kennedy Road, the city added online, advising residents that they should expect additional truck traffic on Airport Way.

However, CP claimed that the union, “withdrew its services and issued a news release misrepresenting the status of the talks”, while the company was still involved in the ongoing negotiations being facilitated by federal mediators.

Both are blaming each other for any supply chain disruptions across the country.