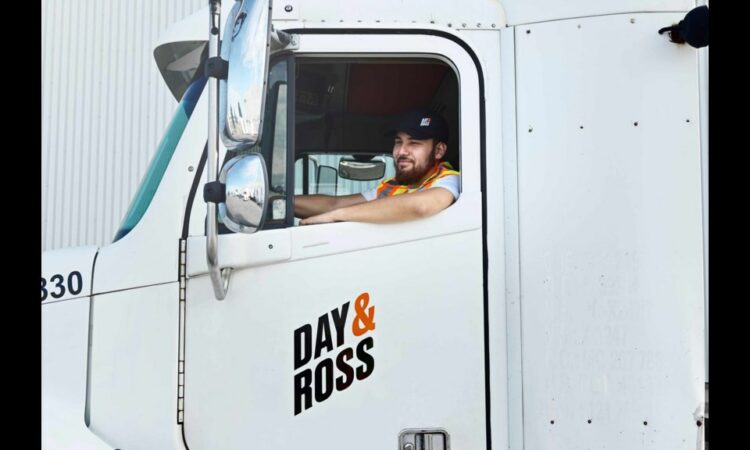 One of Canada’s largest transportation companies, Day & Ross has partnered with Truckers Against Trafficking (TAT), a non-profit organization that works with the transportation industry to educate drivers to help combat human trafficking in their daily work.
Human trafficking is a form of modern-day slavery where people are bought and sold for forced labour or sex work – and it’s happening right here every day. Victims of human trafficking are often targeted at truck stops and on highways. With the help of TAT, reports from drivers have led to both arrests and victim recoveries across North America.
For the second year in a row, Day & Ross is donating $100,000 to sponsor the organization. This sponsorship not only provides TAT with the funds to help educate drivers on identifying human trafficking scenarios, but also allows them to harness the power of a large trucking fleet. The two organizations are working in tandem to provide the training, resources and information truckers need to report suspicious activity.
For the first time ever, the TAT mobile exhibit is coming to Canada and the Day & Ross main terminal hub to help educate their employees. Featuring a theater station and actual artifacts from trafficking cases, the exhibits help tell the stories of victims and showcases the important role drivers play in combating human trafficking. All Day & Ross employees and drivers across Canada and the US have access to the online TAT training.
“Truckers are the eyes and ears of our nation’s highways and are in a unique position to make a difference,” says Doug Tingley, Day & Ross Chief Operating Officer, Canada. “With our drivers travelling from coast to coast, they’re able to make a difference in every province, and every town along their route. To date, there are over 1.2 million truckers trained by Truckers Against Trafficking, making a significant difference in the fight against human trafficking.”
Human trafficking is a concern around the globe, and Canada is no exception. The National Human Trafficking Hotline (NHTH) reports that in the last five years over 41% of the cases truckers have reported to them involve victims that are minors. According to Statistics Canada, “there are various forms of human trafficking, including trafficking for forced labour, for the purpose of exploitative begging or for organ removal; however, trafficking for sexual exploitation is the most detected.”
Day & Ross teams are trained to identify and report these incidents.
About Day & Ross
With over 8,000 employees, drivers, and owner operators in Canada and the US, Day & Ross offers a diversified portfolio of freight and delivery solutions to top brands across North America. The company got its start by hauling potatoes out of New Brunswick in 1950. Today, their key services include LTL/TL and cross-border transportation, logistics, dedicated fleets, and residential delivery.
For over a decade, Day & Ross has been recognized consistently as one of Canada’s Best Managed Companies, and has been named a Top Company for Women to Work for in Transportation for the past four years. Their commitment to safety and sustainability is rooted in their family values and their care for their employees and the communities where they work and live. dayross.com