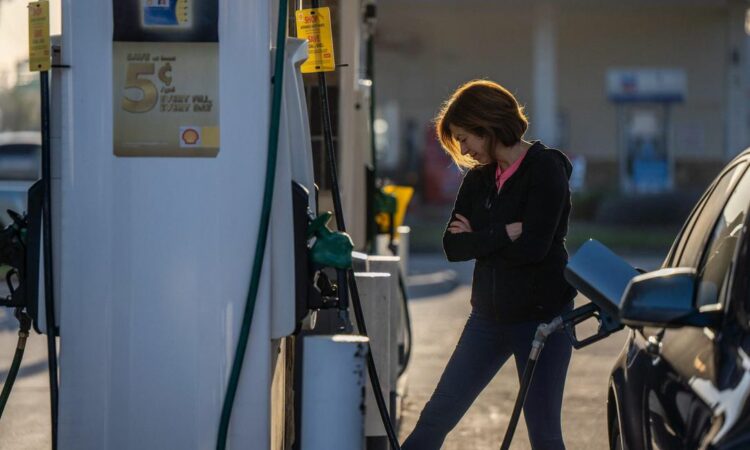 Gas prices are being driven up by the conflict, experts say — but they note a lot of other factors in a big inflation number reported Wednesday.

The war in Ukraine looms large over a new report showing Canadians are paying significantly more for everything from gasoline to pasta compared to the same time last year.

The annual rate of inflation hit 6.7 per cent in March, the fastest year-over-year increase in the consumer price index in more than 30 years, Statistics Canada said Wednesday.

Fuelling much of the increase in March were higher prices at the pumps, as gasoline prices were up 39.8 per cent compared with the same month a year earlier. The statistics agency cited Russia’s war in Ukraine as one of the reasons for the higher prices, as countries across the world have placed bans and restrictions on buying Russian oil.

To be sure, as reports of fresh casualties and accounts of war crimes emerge, the price Ukrainians are paying is immeasurably higher. But to what degree can the high-profile conflict actually explain the rising prices of things in Canada?

Experts say there are some ways that the war in Ukraine can affect the price of things in Canada, both now and potentially in the future. But they cautioned not to place too much blame for Canada’s current inflation on Russia — what we’re experiencing started well before the invasion.

Talan Iscan, professor of economics at Dalhousie University in Halifax said it’s clear that the war in Ukraine has caused an increase in the price of oil and gasoline, since oil is an international commodity with prices determined on a global scale. As countries refuse to buy oil from Russia, the same number of buyers are chasing less supply, which drives the price up quickly.

But, he added, it would be reasonable to expect oil prices to come down again in the medium term, if another oil-producing country such as Saudi Arabia increased the supply of oil it sells to the world. (As a member of the oil cartel OPEC, that country often lowers production in a bid to raise the global price.)

In other words, it could be that the war in Ukraine has a long-term effect on oil prices, or the prices could cool off in response to an increase of oil supply from another source.

But the immediate price of gasoline and oil is not the only consideration for how the war could affect prices.

Mike von Massow, associate professor of food agriculture and resource economics at the University of Guelph, pointed to two other resources that come from Russia and Ukraine and will likely drive further cost increases months from now: Fertilizer and wheat.

“Today we have a perfect storm of impacts on food price,” von Massow said.

Von Massow said he observed some large increases in the price of wheat products such as cereals and pasta not only in the past year, but in the past month, in particular. He thinks it’s the beginning of rising food prices due to the unavailability of wheat from Ukraine and Russia.

“That might not all be due to the war in Ukraine — but there are some things that have gone up very recently at higher levels than the rest of food inflation,” he said. “So to me we’re seeing an impact of those wheat prices already.”

And then there’s the added expenses that will be felt by farmers, even here in Canada.

“There will be some downstream impacts of the fertilizer and fuel costs,” he said. “Trucking and planting crops is going to be more expensive.”

Von Massow said we could start seeing the resulting price increases in food in about four to five months. And how long those impacts last largely depends on how long the war lasts.

Although the price of gasoline painted a dramatic picture, Wednesday’s report showed the consumer price index would have been up 5.5 per cent year-over-year if it had excluded gasoline from its calculations, suggesting far broader price pressures.

To Iscan, it’s clear that the war in Ukraine is just one part of a much larger story about price inflation in Canada, which economists observed six months ago.

“It’s clear from an intuitive perspective that there are multi-faceted events happening leading to the rise in inflation,” he said. “We’re seeing the impact of rising Asia on global demand … there is a trade war that’s still going on between China and the U.S. that led to the reallocation of supply chains.”

The prices of housing and insurance are also rising in significant and sustained ways, Iscan said, indicating that the inflation reported Wednesday is not just a short-term reaction to a global conflict.

David Laidler, a professor emeritus at the University of Western Ontario who has written several books about the effect of monetary policy on prices, said it would be a mistake to chalk up the inflation increases observed in Canada to the war in Ukraine, which is too recent to have had much of an impact yet.

“By in large what I would say is that the inflation we’ve got has its roots in the policies to deal with the pandemic,” Laidler said.

Laidler believes that when the federal government increased spending in response to the pandemic (including an unprecedented deficit of $314 billion for the fiscal year 2020/21), and the Bank of Canada increased the amount of money available in Canada by buying government bonds, this kick-started a cycle that led to inflation.

“I don’t blame the Bank of Canada for doing what they did in 2021 in response to the pandemic. I do blame them for being asleep at the switch about what they’d done,” he said.

Laidler believes tighter monetary controls — a quicker increase in interest rates and slower rate of adding new money into the economy — are key to getting inflation under control.

He added the war in Ukraine could still have an impact on how Canada does this, because the war could increase the cost of important things such as gas and food down the line.

“How the war turns out is going to determine how difficult it is to get the monetary things under control,” he said.