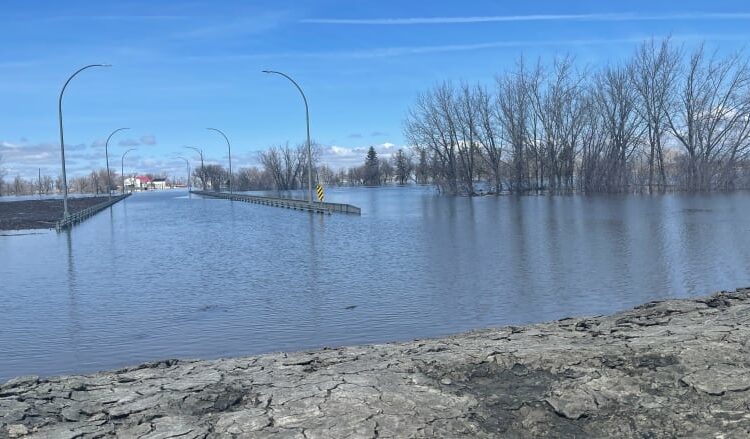 Highway 75 closed due to overland flooding and dike construction

People in communities along Highway 75 in Manitoba are surprised the province has closed part of it due to flooding, especially because it was raised after the last major flood.

The province said it’s detouring traffic because of overland flooding and dike construction in the area, but Gilmore said floodwaters are stable in the area at this time.

“We’re still troubled that they’re doing that so early, because we feel that there’s still an opportunity to be using that route, and it it would add maybe another hour or so on our trip to Winnipeg,” he said in an interview on CBC Manitoba’s Radio Noon on Tuesday.

The closure of the main Winnipeg-U.S. border highway link comes as people continue to be evacuated from the rural municipality.

As of Tuesday, 69 people have left 27 homes, and others have been asked to leave but decided to stay behind with their property, Gilmore said.

“The evacuation orders seem to be constant and we anticipate there will be more,” he said.

An updated Red River forecast that the U.S. National Weather Service issued on Monday predicts the Red River crest at Pembina, N.D., will be 0.61 metres (two feet) below the record set in 1997 and slightly above 2009 levels. It’s expected on May 9.

“That’s troubling for sure,” Gilmore said.

The highway closure just south of Morris was also a surprise for Scott Crick, mayor of the town about 60 kilometres south of Winnipeg.

The province closed the major route on the north side of the town on Friday because of a risk of flooding.

Crick thought the highway south of Morris would remain open a while longer, especially since it was raised recently, but believes it was closed out of an abundance of caution.

“The water still had a couple of feet to go to get on the ground,” he said.

“The challenges is that the water is not quite draining as expected. This is really the first large flooding event we’ve had since Highway 75 was rebuilt south of town, so I believe right now they’re erring on the side of caution.”

Southeast of Morris, the Municipality of Emerson-Franklin declared a local state of emergency on Monday evening. As of Tuesday, 24 municipalities had declared states of emergency, according to the province.

The municipality along the Manitoba-U.S. border, which also relies on Highway 75, issued a public notice reporting approximately 15 road washouts and road closures due to overland flooding.

The municipality is anticipating additional flooding when the Red River peaks next week and has notified people who might need to be evacuated.

The closure of Highway 75 is also causing some delays for truckers trying to cross the border into the U.S. or make deliveries in Manitoba.

Francis Fling, a truck driver from Georgia, normally takes Highway 75 through Manitoba to the Emerson border crossing. The detour added an extra hour to his trip on Tuesday.

“It’s an inconvenience to say the least, but what are you going to do? There’s not much you can,” he said.

Aaron Dolyniuk with the Manitoba Trucking Association said water on roads is just another hit to an industry that’s been impacted by border closures, severe weather and the pandemic.

“It’s really compounded things, and we hear a lot about supply chain delays and increased costs, and this impacts it all,” he said.

The cost of a detour to businesses can run upwards of $200 per truck per trip, Dolyniuk said.

“There’s hundreds if not thousands of trucks making this trip every day, and that has a large impact on the greater supply chain and you and I.”