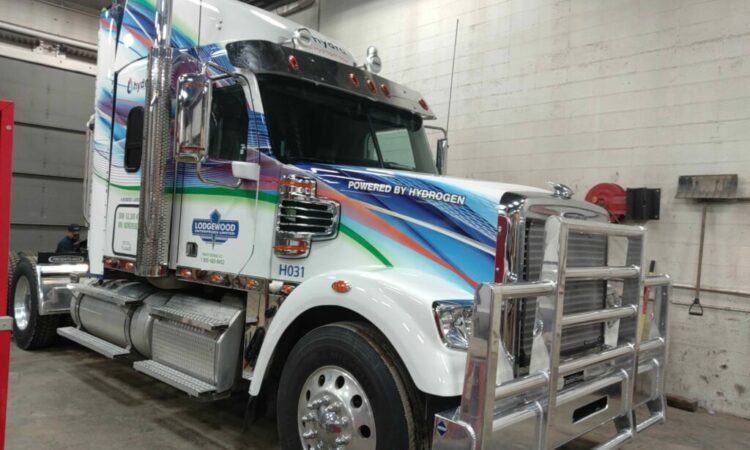 Alberta fleets will soon have the opportunity to test drive one of the most promising answers to zero-emissions longhaul trucking, thanks to a hydrogen demonstration program from the Alberta Motor Transport Association (AMTA).

The province is looking to play a key role in the emerging hydrogen economy, including putting some of the first hydrogen-fueled trucks on Canadian roads. Its AZETEC (Alberta Zero-Emissions Truck Electrification Collaboration) program will see Bison Transport and Trimac Transportation pulling freight behind hydrogen-fueled trucks next year.

Those trucks will be Freightliner Cascadia gliders with retrofit hydrogen fuel cell systems from Ballard Power Systems and Dana electric drivetrains. “Once deployed, these trucks will be the first of their kind in terms of range, power and payload capacity,” the AMTA claims.

However, other Alberta fleets are invited to participate in another demonstration project that will begin this fall. Nikola Motor Company, Hyzon Motors and Hydra Energy are technology suppliers to the program, which will allow fleets to test the clean fuel at no cost.

“There is both significant and ever-increasing interest,” AMTA chairman Jude Groves told TruckNews.com. He noted the association held hydrogen truck ridealongs for members in recent months. “More than 80 carriers participated and we expect this number to go up as members book and test this innovative technology for themselves and within their own logistics.”

The demonstration project is expected to begin this fall and continue until 2024. Any AMTA member fleet can apply to participate. The trucks are supplied by leasing firm Driving Force, at no cost to the fleet, though AMTA notes some additional insurance may be required.

The project is funded by Natural Resources Canada and Prairies Economic Development Canada. Even the hydrogen fuel is covered by the funding partners.

“Completing these trials through this country’s broad weather, longhaul routes, and Canadian weights will help facilitate its reputation as a first adopter and leader of this revolutionary technology,” says the association. Interested fleets can find out more information and apply to participate here.