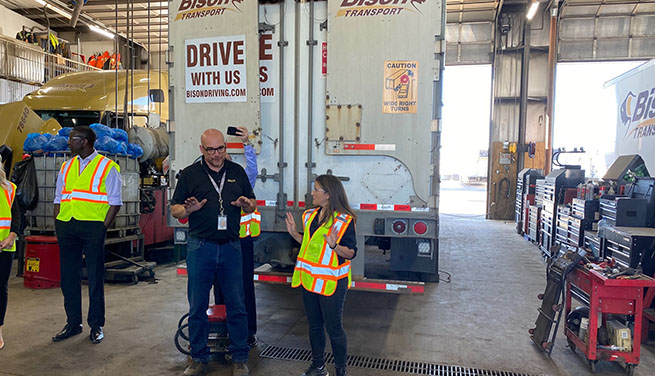 Deputy Prime Minister Chrystia Freeland was in Calgary today to meet with the executive team and staff of Bison Transport and representatives of the Canadian Trucking Alliance and Alberta Motor Transport Association.

Bison’s Trevor Fridfinnson outlined to Freeland the issues associated with attracting truck drivers to the sector and the role government can play.

Fridfinnson also sent a strong message on behalf of the industry that actions like those against the Deputy Prime Minister this past weekend are unacceptable in a democracy.

“Concerning trends over a lack of civility directed to those in public life need to be kept in check. We may not always agree on the path forward, but we absolutely can and must conduct ourselves with civility and respect,” stated Fridfinnson.

CTA would like to thank Bison Transport for presenting our industry’s views and echoes his strong support for the Deputy Prime Minister and all politicians against such actions. Politicians dedicate themselves to public service, and vulgar forms of public offenses have no place in society, CTA said.

CTA would also like to thank the Deputy Prime Minister and the Government of Canada for their ongoing commitment to working with the industry to strengthen our sector, and, by extension, the Canadian economy.