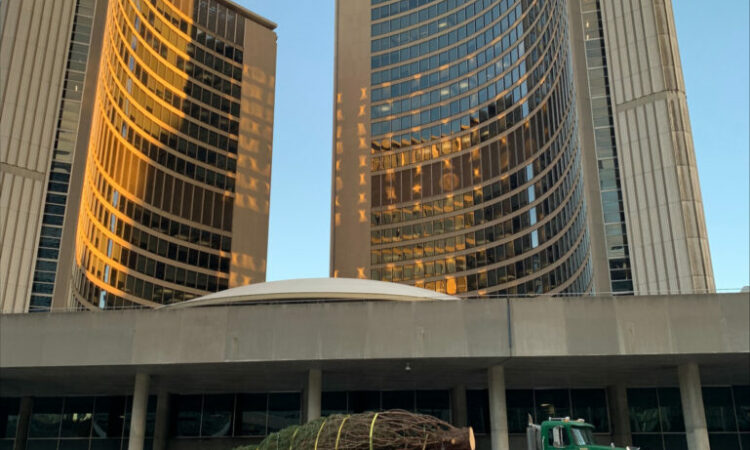 A giant Christmas tree is the center of attraction at Nathan Phillips Square ablaze with the Cavalcade of Lights for the holiday season, attracting crowds of people into the heart of Toronto every evening.

And yes, a truck recently brought the 16.75-metre (55-foot) naturally grown spruce tree from Baldwin, Ont., to the big city. Weller Tree Service, which carried out the move, told TruckNews.com that driver Daniel Boothby, who has been with the company since 2014, delivered the load on a step deck hooked to a Mack tractor.

“Daniel is the driver for all of our Christmas tree installations as he is trained and specializes in this type of load transportation and the installation [erection of the tree] itself,” a Weller Tree Service official said.

The Christmas tree has been decorated with more than 300,000 energy-efficient lights and 500 ornaments, the City of Toronto said in a news release. It will remain on display throughout the holiday season and will then be recycled into mulch for tree planting in the spring.

The Cavalcade of Lights, inspired by international lantern, fire and light festivals, will transform City Hall and its surrounds into a dazzling wonderland each night until 10 p.m. The event will run until Saturday, January 7.