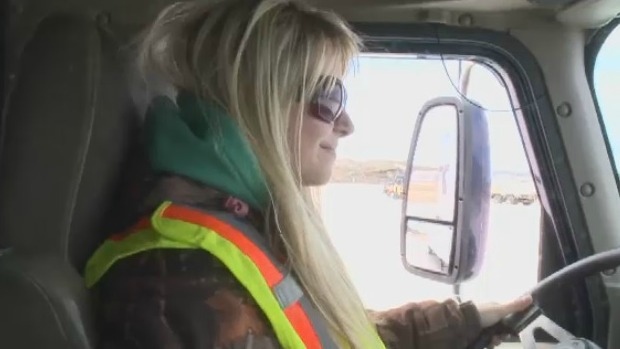 Canada could soon see a growing number of women behind the wheels of semi-trucks, if what has happened in the U.S. trucking industry these last few years is any indication of things to come.

According to the U.S. Bureau of Labor Statistics, thousands of women have entered the industry in America since mid-2020, filling vacancies left by the pandemic and raising the number of women in U.S. trucking to 1.6 million as of October.

That’s nearly 18 per cent of the trucking workforce, an all-time high since 1990, when the bureau started tracking the numbers. Most of those new hires are in driving roles.

Canada has seen a more modest increase following a significant drop in the number of women drivers early in the pandemic, and the industry’s vacancy rate still sits at 9.1 per cent, according to a Statistics Canada labour force survey from November.

However, advocates say programs aimed at diversifying the industry in Canada could deliver a fresh infusion of women and other underrepresented drivers in the next few years.

WHAT THE NUMBERS SAY

The industry went through a contraction throughout 2020 and into early 2021 that disproportionately affected women, explained Craig Faucette, chief program officer at Trucking HR Canada. So while the industry in Canada gained 6,400 women in 2021, that increase mostly brought it back to the pre-pandemic status quo.

“It doesn’t show the very sharp upswing that the U.S. data illustrates,” Faucette said in a telephone interview with CTVNews.ca on Friday. “Basically by June of 2021, we’re finding that we were right back to pre-pandemic numbers.”

Faucette said the company is currently analyzing new census data made available in November, which should shed more light on the job numbers beyond mid-2021.

Shelley Walker, CEO of the Women’s Trucking Federation of Canada (WTFC), noted there has been some progress in the form of a “slight increase” in the number of women entering the industry as professional drivers. She said greater numbers of women have also taken an interest in enrolling in training programs in the last two years.

“I know from talking to a few of the truck training schools that they’ve seen an uptick in women, anywhere from three to 12 per cent,” she told CTVNews.ca during a telephone interview on Monday. “So the training schools are a good indication that we are bringing more women in.”

THE FUTURE OF TRUCKING

In recent years, Walker said, the industry has struggled to attract new workers, and groups including women, racialized people and members of the LGBTQ2S+ community still remain underrepresented.

“There is still room to grow and opportunities to be explored in getting more women in as professional drivers,” she said.

Across Canada, organizations like Walker’s and Faucette’s are working to drive that growth through scholarships, mentorship programs and work-placement programs tailored to people who identify as women, as well as to youth and other underrepresented groups. And they’re getting results.

In 2018, WTFC launched an annual scholarship program to cover the full cost of a truck training course for up to three recipients each year. Since the program launched, Walker said, scholarships have been awarded to eight women from across the country. Out of those, seven are still in the industry.

In 2021, the organization partnered with the Workforce Planning Board of Waterloo Wellington Dufferin on “Drive Forward,” a tuition-free, 12-week AZ truck licence training program. The program received funding from the federal and provincial governments, and aimed to prepare women, Indigenous, LGBTQ+, non-binary, visible minority, low-skill, and low-income students for a career in the trucking industry. Walker said it had an 85 per cent success rate.

“Right now, we are waiting to hear about government funding on the federal level to run a program like that again, in four different locations, not just in Ontario,” she said.

As far as Walker is concerned, the industry’s survival depends on its ability to adapt to a changing world and welcome an increasingly young and diverse talent pool.

“Too many people are focused right now on what they figure is the hot seat: the empty seat of a truck,” she said. “And nobody’s putting any thought into the future. So if we don’t start getting back into our school system, we don’t start teaching kids about our industry, the ongoing driver shortage is going to continue.”

Like Walker, Faucette has his eyes trained on future generations of truck drivers. He oversees a pair of Trucking HR Canada programs – collectively known as the THRC Career Expressway – that incentivize employers to work with youth. One program offers subsidies to companies that create internship opportunities for students in post-secondary school, and the other provides subsidies to companies that train and hire youth who face barriers to employment. Both launched in 2020.

Faucette said women represent 35 per cent of all the people enrolled in both programs – much higher than the proportion of women working in the industry now – and that the latter program has a success rate of more than 90 per cent, meaning almost all of its participants have found jobs in the industry.

“When we see that the numbers are showing that way, we’re just happy,” he said.

Faucette said Trucking HR Canada plans to launch a survey of women both in the industry and seeking employment in the industry in order to better understand how employers can help make it safer and more equitable.

“What are the mechanisms they need in place to feel supported?” he said. “And to have the ability to grow?”

He did not specify when that survey will launch. Walker, who drove trucks before she worked full-time with WTFC, said in recent years she’s seen the traditionally male-dominated industry begin to identify and address barriers to inclusion.

“I’m starting to see a lot more companies that are really interested in changing their company culture to be more inclusive of women and underrepresented groups,” she said. Truck stops and company buildings that previously only offered men’s washrooms now offer other options, she said, and employers are thinking more about the needs of a workforce that isn’t entirely made up of white, middle-aged men.

“So it’s breaking down those barriers,” she said, “and making (employers) start to understand those things.”