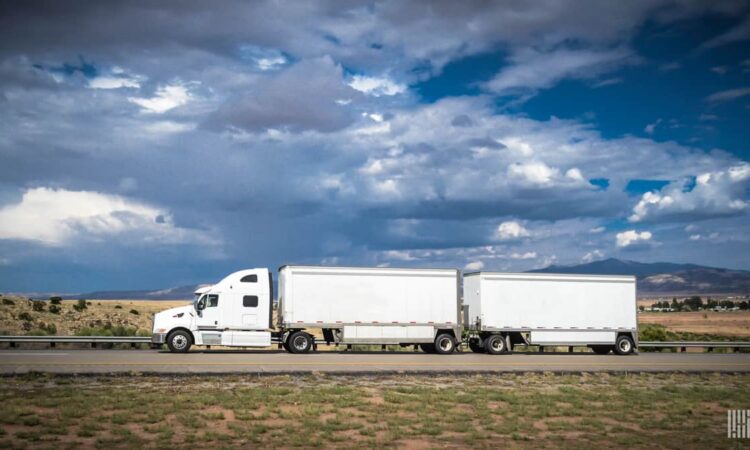 After more than a year of debate, Mexican lawmakers nixed an initiative that would have banned double tractor-trailers used for commercial transportation across the country.

The bill will be replaced with a measure to update technical safety details of regulation NOM-012, which governs the weights and dimensions of heavy-duty trucks traveling on roads and highways.

“Lorena Pinon announced that her initiative to reform the Federal Roads, Bridges and Motor Transport Law, which sought to eliminate the double articulated configuration, will be replaced by an update of the NOM-012,” according to a recent news release from Mexico’s National Chamber of Freight Transport (CANACAR).

Pinon, a member of Mexico’s Chamber of Deputies, proposed the measure to ban double tractor-trailers in October 2021, with the aim of reducing traffic accidents. The Chamber of Deputies is the country’s lower house of the Congress, similar to the U.S. House of Representatives.

Pinon had been pushing the initiative as a way to reduce fatal traffic accidents caused by double tractor-trailers, which she referred to as “death machines” in a news release.

Pinon and other Mexican officials said double tractor-trailers are responsible for up to 8% of traffic accidents annually.

“This legislative [body] has yet to legislate to ban double trailers, because they are death machines that also do not circulate in other countries … due to the danger they represent,” Pinon said.

Double tractor-trailers are legal in the United States and Canada. U.S. federal limits are 80,000 pounds gross vehicle weight, 20,000 pounds on a single axle and 34,000 pounds on a tandem axle group. Vehicles are allowed up to seven axles, 86 feet or more between axle sets and a maximum load of 105,500 pounds.

Pinon has not released any statements as to why the proposed ban has been dropped, but CANACAR officials said they have held several meetings with her in recent weeks.

“With her participation in the Chamber of Deputies during the appearance of Jorge Nuno Lara, head of the Department of Infrastructure, Communications and Transportation, Pinon highlighted the meeting she had with the CANACAR and other motor transport associations to jointly present an initiative where road safety is improved,” CANACAR said. “Lara announced that, in the coming days, an update of the NOM-012 will be carried out, with technical and mandatory measures for greater road safety for all, without [double tractor-trailer] restrictions.”

Authorities in Mexico decided to postpone until 2025 a ban on genetically modified (GM) corn purchases from the United States that was set to begin in 2024, according to Reuters.

The postponement came after Agriculture Secretary Tom Vilsack recently said the U.S. was prepared to call for a dispute resolution panel under the United States-Mexico-Canada Agreement unless Mexico changed its plan to bar at least some U.S. exports of GM corn.

Mexico’s plan to prohibit the importation of the crop began in 2020, when Mexican President Andres Manuel Lopez Obrador decreed he would eliminate the use of the herbicide glyphosate and GM corn in the country.

Mexican officials said along with extending the deadline to 2025, they were working to overhaul the country’s plan to ban all importation of GM corn.

“Our U.S. counterparts considered this response satisfactory. We submitted a document for discussion, possibly in the second half of January, where this issue will be definitively resolved,” Mexican Agriculture Minister Victor Villalobos told Reuters.

Mexico has been one of the main buyers of corn produced in the U.S. for decades. Mexico imported $4.7 billion worth of corn in 2021, behind China, which imported $5.06 billion.

More than 90% of corn grown in the U.S. is genetically modified, according to the U.S. Department of Agriculture. Critics of Mexico’s plan to ban GM corn said it could devastate the U.S. agricultural industry.

Arizona recently allocated $8.9 million for the construction of a second international border crossing in the city of Douglas and the neighboring city of Agua Prieta, Mexico.

The funding will support the construction of the port of entry in Douglas, 5 miles west of the existing port of entry. The two-port solution builds on the trade relationship between Arizona and Mexico, according to a news release.

“One of my top priorities while in office has been to advance Arizona’s relationship with our neighbor Mexico,” Arizona Gov. Doug Ducey said in a statement. “A modernized port in Douglas will allow for increased trade, tourism, transportation and broadband, opening new pathways for economic collaboration.”

The construction of the second port of entry in Douglas is part of a larger planned trade network — the Douglas International Commercial Corridor — aimed at relocating commercial truck traffic out of the downtown crossing through the new port of entry.

“Billions of dollars worth of goods pass through the port of entry in Douglas every year,” Douglas Mayor Donald Huish said in a statement. “This investment will help our city modernize this vitally important trade route.”

Xcell Logistic Services is a 3PL and customs broker with warehouses in Laredo, Texas. Xcell Logistics Corp., headquartered in Mexico City, has offices in several Mexican ports and border crossings with the U.S., according to a news release.

Irving, Texas-based B.I.G. Logistics is part of SecurCapital Corp., a 3PL and technology-enabled warehouse management platform with facilities throughout Texas and along the U.S.-Mexico border.

“As a SecurCapital company, we have now completed our strategic Texas footprint,” B.I.G. Logistics CEO Vinod Baliga said in a statement. “B.I.G. now operates on the border with our legacy station in El Paso and an added Laredo presence, as well as an additional seven stations in Mexico via this acquisition.”