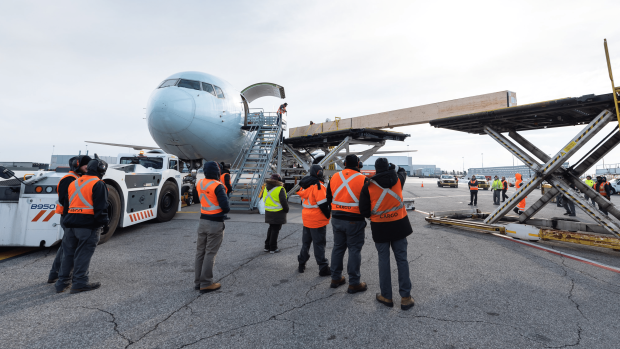 Air Canada staff in Toronto were “put to the test” when recently tasked with shipping one of the largest items the airline has ever loaded into a Boeing 767 – a 44-foot long IMAX screen weighing nearly 2,000 pounds.

The screen was shipped to Quito, Ecuador in November for a viewing of James Cameron’s “Avatar: The Way of Water,” according to a release issued by the airline Tuesday.

“While Air Canada Cargo moves some pretty large items with its Boeing 767 freighters, the shipment of an IMAX screen from Toronto to Quito in November put the aircraft and the Air Canada Cargo teams to the test,” the release read.

“The 44-foot long, 800-kilogram crate that housed the screen was one of the largest items Air Canada Cargo has fit into the 767.”

Air Canada says they’ve never had to transport something so long in the 767s before, meaning the team “literally had to write the manual on how to properly and safely ship the screen.”

“We had to think outside the box because this was something we never did before, and despite some initial thoughts of ‘what did we get ourselves into,’ everyone on the team bought into the challenge and was excited to solve this puzzle,” Ansari said. “We felt it would be a real feather in our cap.”

The screen was first transported from Montreal to Toronto Pearson International Airport by truck, Ansari said.

The team then had to build a mock-up of the crate that would carry the screen using ABS pipes. This initial step took days, they said.

Then, the team used two loaders, placed at a “canted angle” to the 767, that lifted the crate, “while a team of up to 20 Air Canada staff employees helped manoeuvre the crate into position inside the main deck.”

It took several hours of “methodical” movements to make sure the crate was properly secured for its transcontinental flight.

“This was a total team effort and everyone at Air Canada Cargo is really proud of this,” Ansari said.

“There was a lot of excitement around this challenging shipment, but the teams all rose to the occasion and executed the plan.”