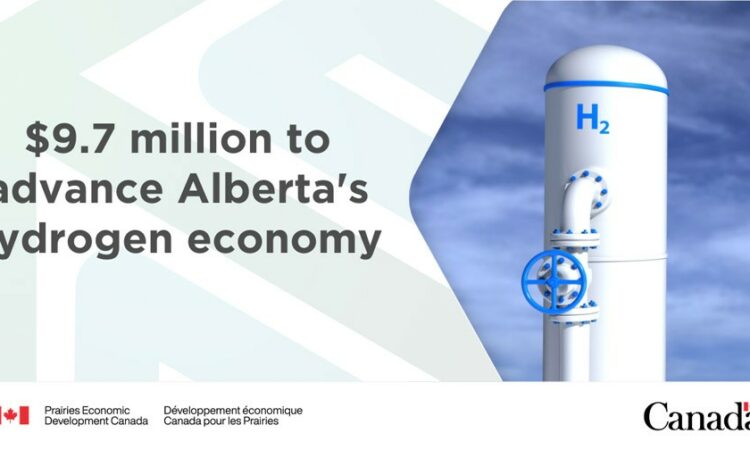 Momentum building as sector grows, but there’s competition with U.S. for investment

As the Canadian Pacific Railway locomotive moves along the tracks in Calgary, something is clearly amiss.

It’s the typical size and look that you’d expect, but what’s absent is the low rumbling noise of the diesel engine.

Instead, this locomotive is powered by hydrogen fuel cell and battery technology as part of a trial by the railway to explore whether the low-emission vehicles are strong enough and reliable enough to potentially one day revolutionize operations at the company.

Over the last several years, there has been an increased focus on the potential for hydrogen to decarbonize many industries and help countries reach their climate goals, while revamping energy systems along the way.

The next 12 months will be critical, experts say, in understanding whether that vision could plausibly become a reality in the near future or remain part of the imagination for decades to come.

There is excitement in the Canadian industry about what 2023 will bring as several demonstration projects are set to take place, while construction will also begin on a massive new hydrogen production facility.

For CP Rail, the hydrogen locomotive completed its first “revenue trip” a few months ago with the expectation to have the trains operating in Vancouver, Edmonton and Calgary by the end of 2023. The next step will be testing out the technology through the Rocky Mountains.

“It’s a perfect test bed. If you can operate there: heavy haul, cold temperatures, the most challenging operational conditions I’ve ever experienced in my career. And if it works there, it will work everywhere,” CP’s chief executive, Keith Creel, said during a speech at the RailTrends 2022 conference in November.

“If this proves its mettle and it shakes out through the very tough validation test we’ll give it, [it will] truly be transformational for this industry.”

Relying on hydrogen as a fuel source isn’t a new concept, but technology is advancing to improve performance, at the same time as there is an increased focus on climate change around the world.

This year will mark the start of a few other experiments as hydrogen-powered buses and semi-trucks hit the road.

A pair of transit buses will transport passengers in Edmonton and nearby Strathcona County as part of a one-year pilot project.

Meanwhile, a hydrogen fuelling station is under construction in Edmonton to allow the Alberta Motor Transport Association to test out semi-trucks on the province’s highways. The organization is looking to offer up to four different truck models this year for local companies to try out.

“I think the next 12 months is largely a proof of concept,” said David Layzell, an energy systems architect with the Transition Accelerator — a non-profit organization set up to help Canada reach its climate goals — and professor emeritus in biological sciences at the University of Calgary.

“We can actually make hydrogen cheaper than diesel fuel today,” he said, although the challenge is the much higher cost of transporting hydrogen and constructing the fuelling station.

“We are only going to get those prices down by getting to scale,” Layzell said.

Hydrogen has been around for a long time, but there is renewed enthusiasm for the sector as a way to jump-start the transition to a world reliant on low-carbon energy.

Hydrogen is an energy carrier, and experts say it can be used primarily for heating and as a fuel for transportation.

The amount of pollution associated with hydrogen depends on how it’s made. For instance, if solar or wind facilities — rather than a coal power plant — produce the electricity that is used to create hydrogen, the emissions are relatively low.

Construction has just begun in northeast Edmonton on what is expected to be the largest net-zero hydrogen plant in the world by Air Products Canada. The $1.6-billion facility will use natural gas to produce hydrogen with the goal of sequestering 95 per cent of the emissions and store them underground.

“The challenge with hydrogen is a little bit of the chicken-or-the-egg challenge,” said Kevin Krausert, chief executive of Avatar Innovations Inc., a Calgary-based firm that helps develop energy transition technologies.

Construction of the Air Products facility, he said, begins to overcome that problem.

‘Too little, too late’

There is momentum in the hydrogen sector in Canada, but some experts warn that the most critical question in the next 12 months is not so much about the technology itself but how willing governments are to support the industry.

“That is relative to what’s going on to the south of us with the United States’ policy supports that are very strong and very attractive and could take all the capital [investment] that we might spend up here and divert it southward,” said Ed Whittingham, an Alberta-based public policy consultant.

The U.S. government’s Inflation Reduction Act [IRA] includes significant subsidies to not only offset the cost of constructing a hydrogen facility but to subsidize its operations, among other funding programs.

In some cases, Whittingham said, up to 75 per cent of the cost to produce low-carbon hydrogen could be covered by the U.S. government.

“What really is going to determine whether hydrogen stays niche and stays small scale in Canada or whether it goes mainstream and Canada really becomes a serious competitor is our response to what the U.S. has done,” he said.

“And it could be a case, frankly, of too little, too late.”

The federal government is proposing a clean hydrogen investment tax credit to entice companies to develop new clean hydrogen projects. The tax credit will be worth at least 40 per cent for projects that meet certain labour and low-emission requirements.

In its 2022 fall economic statement, the federal government warned that the subsidies offered in the United States were more generous and increase the challenge to attract investment north of the border.

“Canada will need to do even more to secure our competitive advantage and continue creating opportunities for Canadian workers,” the report said. “Without new measures to keep pace with the IRA, Canada risks being left behind.”