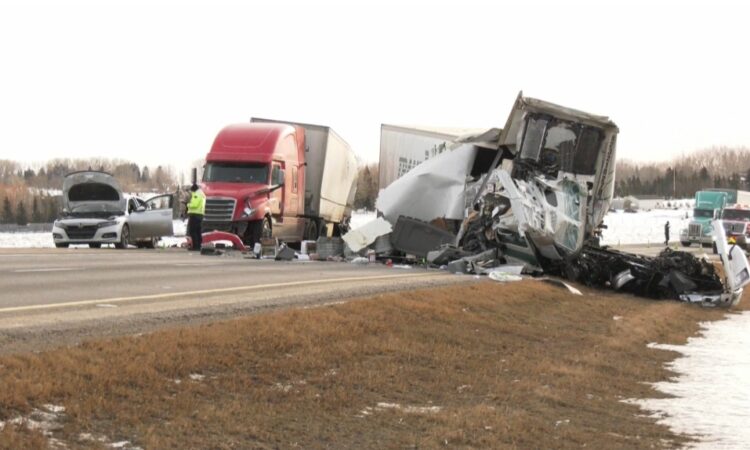 One man is dead and three others were taken to hospital after a semi crashed into two other semis parked along the shoulder of the Trans-Canada Highway east of Calgary early Friday morning.

RCMP confirms the crash occurred around 3 a.m. near Paradise Road in the city of Chestermere, a few kilometres east of Calgary city limits.

RCMP officers from both Chestermere and Strathmore arrived on the scene minutes after the crash.

“What I know, two semi trucks were stopped on the side of the highway, (a) third semi truck came along and ran into the back of the back semi, pushing it into the front semi,” said Cpl. Robert Kuehn.

“There was another passenger vehicle that was also on the side of the road that got damaged as well.”

Kuehn believes the deceased was from one of the trucks that was parked on the side of the highway.

EMS says all of the drivers were men between 30 and 50 years old and the patients taken to hospital are in non-life threatening condition.

Shams Mangal, a big-rig driver and one of the first on the scene, saw one of the trucks with its flashers on.

“I stopped the truck. I just wanted to see what’s going on – what happened (and) if anyone needed help,” he said.

“I see the driver sitting on the driver’s seat of the first truck with his side windows broken and I asked him, ‘Are you OK?’

“He just barely moved his head and couldn’t talk.”

Mangal says he wasn’t prepared for what he saw next.

“Then I walked up a little more (and saw) a dead person laying on the ground and I kind of got sick to my stomach. Five minutes later, cops and fire trucks showed up and we’ve just been watching since then,” he said.

“But I heard from one of the drivers a truck was broken down and the truck in front of him stopped.”

Mangal has spoken to RCMP to help with the investigation and officers want to hear from anyone else who witnessed the collision.

“Witnesses for this type of thing are very valuable,” Kuehn said.

“What they see is definitely information that we want. I’m not sure how many witnesses there were, but anyone who did see anything would be encouraged to get a hold of Strathmore RCMP to let us know what they saw.”

RCMP collision analysts from Lethbridge were at the scene trying to piece together what took place, using a drone to record the scene from above.

“It takes a lot of time,” Kuehn said.

“(This is) a big part of it. They’re here doing their thing right now, photographing, measuring, recording the scene to try to determine what exactly happened. So they’re very detailed – very extensive with what they do.”