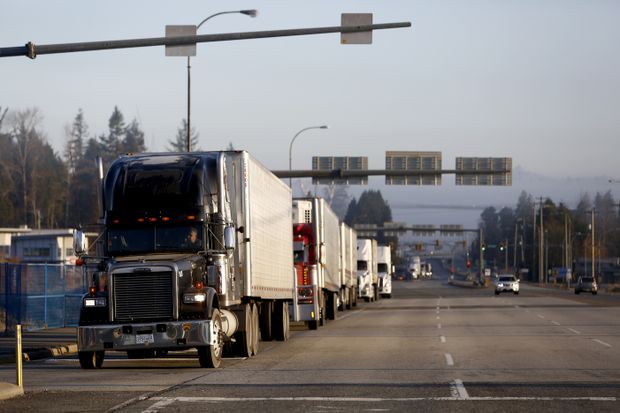 He was told to go “out in the woods” and handed a roll of toilet paper.

Across Canada, truck drivers and couriers are being barred from restrooms while they deliver essential goods, including medical equipment and fresh produce. Drivers say their services are welcomed by businesses, but their basic human needs, including the need to relieve themselves, aren’t being accommodated because of fears they’ll spread COVID-19.

The new normal is forcing drivers, who are on the front lines of the COVID-19 pandemic, to work in unsanitary conditions, urinating in their pants, relieving themselves outdoors and going days without a shower. It’s pushing truck drivers to the brink even as their critical role in Canada’s supply chains becomes obvious to a country gripped by the novel coronavirus outbreak.

The latest on the coronavirus: Toronto cancels all public events through June 30; Quebec warns of equipment shortages

Politicians and industry groups say they are trying to find solutions to what they describe as a patchwork of rules and services, but the companies and drivers at the centre of the problem say changes need to be made now.

Mike Major, a dispatcher and driver with B&R Trucking, in Belwood, Ont., said he told a driver not to pick up a load from a customer after the client refused to allow him access to their restrooms – even though he had originally been told he could use the facilities.

“He handed him a roll of toilet paper and told him to crap out in the woods,” Mr. Major said, calling the treatment “obscene.”

After the driver left the goods for shipment at the site, the company apologized and backtracked, but it should never have reached that point, Mr. Major said.

It’s an issue Canadian drivers say they face across North America, whether they are last-mile couriers or on a long-haul route. Some businesses, accepting deliveries or sending shipments out, are banning drivers from using their restrooms, as are many gas stations, restaurants and fast-food chains. On top of that, drivers say showers at some truck stops are now closed, forcing them to go without one for days at a time.

These conditions, unimaginable just a few weeks ago, are prompting reminders that shouldn’t be unnecessary: “We are human beings and we deserve to be treated as such.”

“This is going to come back and haunt the businesses that are closing their restrooms to drivers,” Mr. McNaughton said. He said the problem is widespread in Ontario and he is being sent “dozens and dozens” of signs from truckers that show businesses turning them away.

According to Purolator, one of Canada’s largest courier, freight and logistics companies, most drivers are having the door slammed in their faces. Ken Johnston, Purolator’s chief human resources officer, said the issue is particularly pronounced in urban centres, where there are no specialized truck stops.

“We have had reports unfortunately of people having ‘accidents,’” Mr. Johnston said. “It’s not only embarrassing, but it’s really a public health issue.”

Health officials have told the company that access to public washrooms is not only safe but also helps to stem the spread of COVID-19 because it ensures people can wash their hands, Mr. Johnston said.

He said he’s most surprised to hear gas stations are refusing access, telling drivers they’re out of order or no longer accessible.

Mr. Johnston said Purolator is still trying to persuade companies that buy its services to allow their drivers to access restrooms and is also trying to convince gas stations to reopen their facilities.

On Tuesday, Ontario Premier Doug Ford had a message for the businesses restricting access: “If it wasn’t for the truckers you wouldn’t even be open.”

Federal Transport Minister Marc Garneau said his department is aware of the issue and is working on safety guidelines specific to truckers and trying to come up with solutions, such as putting food trucks at rest stops where restaurants have closed.

“Truckers are keeping the economy going and so we need to make special provisions,” he said.

The issue is also revealing a disconnect between what corporate headquarters are saying and what transportation companies and drivers say they’re seeing on the ground.

For example, Shell Canada, Petro-Canada, Co-op Fuel and Ultramar have said that, as a general rule, their restrooms and showers remain open. However, they may be closed at times for cleaning or because of staffing shortages.

“We see ourselves as an essential service,” said Tara Lemay, a spokesperson for Shell Canada. Ms. Lemay said the company’s priority is that restrooms and gas stations remain open, but she added that for independently owned locations it’s the prerogative of the individual owner to decide.

United Farmers of Alberta Co-operative Ltd., with sites in British Columbia, Saskatchewan and Alberta, initially closed its washrooms and showers outside of regular hours because of cleaning concerns and because people were stealing cleaning supplies and toilet paper. But chief executive officer Scott Bolton said the decision was reversed within a day because they realized their mistake.

He said the facilities are now cleaned frequently throughout the day and his message to other businesses is: “It can be done.”

“Truck drivers have always been viewed as the scum of the earth,” said Bob Degnan, a truck driver based in Abbotsford, B.C., adding there’s no respect from the public for the skill needed to handle a truck and the sometimes hazardous materials on board.

But he said “attitudes are changing. … Any of us that are left after this, if we don’t contract the coronavirus and expire from it, I think we’ll be a lot more highly regarded than we were.”