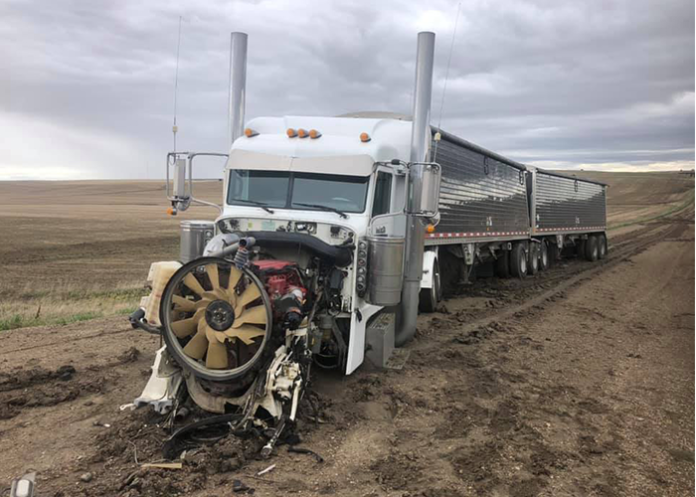 A Canadian tow service recently shared a remarkable set of photographs as a reminder to both truckers and farmers of the trouble you can run into when you attempt an amateur tow job.

Saskatchewan-based tow service Rosetown Towing shared some unbelievable images of the aftermath of a tow job gone wrong in a May 21 social media post.

Rosetown Towing says that they were called in to rescue a semi truck and trailers stuck in the mud after a large farm tractor did major damage during an attempted tow.

“A heavy wrecker or winch truck is a slow powerful controlled winch and most operators are trained where and how to hook up.
A farm tractor with a chain or strap has to jerk and that’s where the damage occurs,” Rosetown Towing explained in their post.

Company owner Jamie Kemp told automotive news outlet The Drive that the trailers probably should’ve been uncoupled from the truck and that the amateur towers may have hooked the tow strap to the front axle instead of the frame of the truck.

The tow company also clarified that they shared the post and photos “not [to] make truckers and farmers out in a bad way but to bring awareness of what can possibly happen using a large farm tractor to pull out a seriously stuck truck and trailers.”

The incident brings to mind a truck stop mechanic’s tow attempt caught on video in Southington, Connecticut, back in 2016.