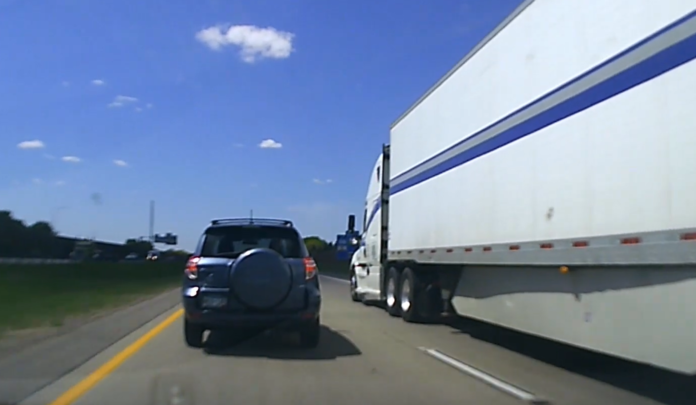 A motorist got a first-hand lesson in semi truck blind spots in this near-miss video.

In the clip, the motorist can be seen traveling on the driver’s side of the rig behind another four wheeler. The front four wheeler then passes the rig, so the filming car speeds up to pass the truck as well, but they aren’t fast enough. The motorist hangs out beside the big rig for just a little too long, and the trucker moves into their lane, forcing the four wheeler onto the shoulder in order to avoid a serious wreck.

Luckily, everything seems to have turned out okay, but we hope the motorist learned a valuable lesson that day.

“The vehicle in front of me had been going about the same speed as the semi for about a mile, and I was hoping she would accelerate in the furthest left lane to pass, as Minnesota law says slower traffic should move to the right,” explained the video poster.

“I didn’t see the semi driver signal the lane change, I just reacted and luckily was able to utilize the shoulder to avoid the collision. Since I couldn’t see what was on the other side of the semi, I am assuming they were avoiding some sort of collision themselves. Nevertheless, it was pretty freaky even though I didn’t really react at the time.”

This incident definitely could have ended far worse.