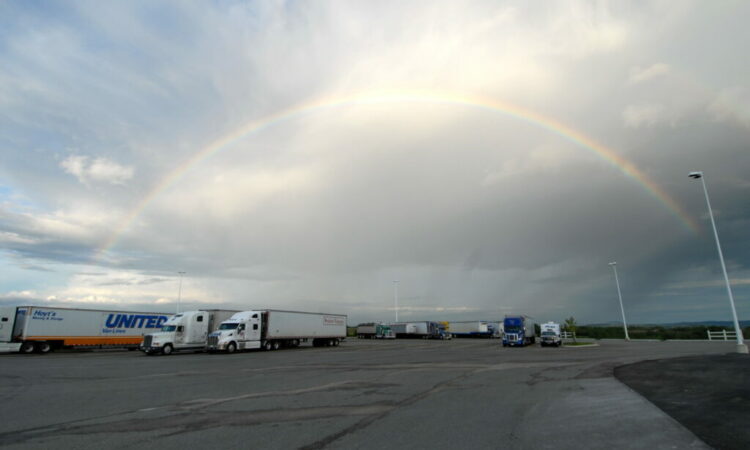 Have you ever arrived late to a meeting because all the nearby parking lots were full? You drive deeper underground, down the spiral ramps searching for 140 square feet of unoccupied blacktop. There’s a Beemer taking up two spots to save his precious paint job; and a pickup truck parked so close to the line that nothing wider than a Smartcar could fit into the adjacent space.

You finally find a spot — two buildings over — and dash upstairs to the meeting where you sheepishly explain what happen. Everybody nods and chuckles and all’s forgiven. It happens all the time.

If it were only that simple for a truck driver.

Driving around in circles for the final few panic-stricken minutes only gets you that much closer to an Hours-of-Service violation that stays with you for the next 14 days. The severity of the violation depends on how far you must drive to find refuge for the night. It might be easier to take a parking ticket than the violation, but either way, drivers are seldom able to nod and chuckle their way out of such a situation.

Thousands of drivers are placed in that untenable position every evening in North America – choosing between parking in a safe and secure location with amenities like food service, washrooms, and the relative safety of fenced compound versus holing up beside a dumpster in a vacant lot or on a freeway on-ramp.

The recent trend of booking parking spaces through smartphone apps or directly with a truck stop may provide relief for the driver doing the booking, but it takes a parking space out of circulation for drivers that do not or cannot book a space in advance. Half the drivers we spoke with for this story reported pre-booking a space only to arrive and find all the spaces taken.

“I reserved and paid for a spot at a truckstop in Tulsa once, only to arrive and find all the spaces taken,” says company driver Libby Doughty. “They had my reservation on file, but they wouldn’t honor it because the spaces were full and the policy there is not to wake sleeping drivers — even the ones who are illegally parked — because it dangerous for the truckstop staff.”

Doughty says drivers who illegally park in a reserved space just ignore the knocks on the door urging them to move.

Lynda Perepolkin, a company driver with Reimer Bros. Trucking based in Armstrong, B.C., says she too has encountered over-booked parking, but says reserved parking really isn’t a solution to the bigger problem.

“It’s gets one driver off the road and safely parked, but others are out of luck,” she says. “That space would have filled up sooner or later anyway. It’s just a matter of who is prepared to pay and who isn’t – or can’t.”

According to a survey published in June by the American Transportation Research Institute (ATRI), Truck Parking Information Systems: Truck Driver Use and Perceptions, less than 60% of 1,100 surveyed drivers reported using a truck parking app within the past 12 months. That’s still just a fraction of the total driver population, but the percentage suggests the apps are gaining traction.

The survey results showed over-the-road drivers are more likely to use a parking app than regional or local drivers, and drivers aged 25 years old or younger with less than five years’ experience were more likely to use parking apps than older and more experienced drivers. ATRI’s analysis suggests younger drivers are likely more comfortable with app-type solutions, and are probably less familiar with parking options along their routes, especially when they are not serving a regular customer base.

There are currently about a dozen truck parking apps on the market, with the ATRI survey showing the Trucker Path app to be the most popular among the surveyed drivers. The app is more than just a truck parking locator: it also shows the locations of other in-demand services such as truck washes, weigh stations, rest areas, truck dealers and Walmart stores among others. Many of the other apps — particularly the truckstop-specific apps like Pilot/Flying J’s MyPilot and TA/Petro’s TruckSmart — offer a suite of other services, too.

While such apps can help show the way to various parking facilities, whether or not you find available space is another story. Drivers say planning is key to finding a parking space, but it’s good only as long as your luck holds out. B.C.-based company driver Carole Webster plans her trips around delivery times and available parking, sometimes electing to stop early if she’s confident of finding a space.

“There are certain places I just know I’m not going to get anywhere near, like Seattle or Lodi, California, unless I’m there by mid-afternoon,” she says. “I try to get somewhere close and leave myself enough time in the morning to drive into the customer. The apps are OK in areas where the parking shortage isn’t critical, but I find it’s just as useful to call the customer and ask if I can park there if I arrive early.”

As with nearly every major metropolitan area, transit times are a crapshoot. It might take an hour to get from point A to point B most of the time, but delays can double the trip time through no fault of the drivers. “Customers are less than sympathetic with late arrivals,” says Doughty. “Arriving late can result in fines and/or delays of four to five hours or even overnight. Unless you can get close, or park at the customer’s location, there’s hardly any guarantee of an on-time arrival.”

It’s no better in Canada. Doughty says Toronto is worse than California. “There are far fewer places to park to begin with, especially to the east of the city, and of the parking available around Mississauga and Brampton, much of it is occupied by local drivers who park there and go home,” she says.

She notes that arriving at the customer early to avoid the possibility of being tied up in traffic is one thing, but once the clock starts ticking, arriving too early can wreck the schedule for the rest of the day, or the rest of the week.

Since the physical shortage of parking spaces is the real problem, strategies for finding and procuring parking are only partial solutions.

Perepolkin uses Google Earth to search out what seem to be areas of vacant real estate near a destination. These may still be private property of some sort, but it might be a place she can park. She worries about vandalism and theft at such unsecured spaces, but that’s sometimes her only option.

Type “Trucking Parking” into the Facebook search bar and several pages pop up. These are often internal company sites or members-only sites run by drivers. Again, their usefulness can be limited by the number of drivers looking for parking at a given location.

Doughty keeps a little black book nearby to record sites she sees in her travels. She just jots down the location of a spot with potential and may refer to it later if the need arises.

Webster says she used to feel fairly comfortable parking at well-lit bog-box stores such as Walmart, but notes that most of the stores no longer allow drivers to park overnight. “We ruined that one for ourselves,” she laments, “leaving trash all over the parking lots along with bags and bottles filled with human waste.” Her preferred option is parking at the customer when that’s even possible.

One of the common themes among the drivers we spoke with was “leave early, arrive early.” Veteran owner-operator and Maritimer Ivan Paynter says running at night makes finding parking during the day a little easier, but sleeping during the day and scheduling appointments around that reversed schedule is admittedly difficult. “Once you change your schedule like that it’s hard to get back on track with the Hour-of-Service,” he says. “It’s not hard to find a place to park in New Brunswick, but Ontario is really tough. I see a lot of local trucks parked at truckstops and fuel stops in southern Ontario. Maybe they pay for that parking, I don’t know, but it doesn’t leave a lot of room for drivers from out of town.”

Is paid parking the future?

According to veteran U.S. owner-operator Henry Albert, the reason we have a shortage of parking is because there’s no money in it for the parking providers. While he’d rather there was some other way, he sees the expense of paying for parking as justified. “It’s a business expense,” he says, adding “it’s not something company drivers should be paying for out-of-pocket.”

A few locations in Canada have flirted unsuccessfully with paid parking, the 10-acre Truckstop near Belleville, Ontario for example. They lost a lot of business when paid parking was implemented and soon backtracked on the idea. That’s because, presumably, there was enough free parking available elsewhere. But in major centers like Vancouver, Toronto, Montreal and others, that’s simply not the case.

We have heard of some carriers making arrangements with competitors in different markets to share parking space at various terminals, which seems to work for smaller numbers of trucks. But we can’t see carriers throwing open their gates for everybody and their brother to park.

Drivers set to deliver in the Toronto area are now overnighting as far away as Woodstock and London to the west, and Cobourg and Belleville to the east. In the Vancouver area it’s Abbottsford or Chilliwack. For Montreal-bound drivers, there’s limited parking on the Ontario side of the Quebec border.

All those refuges are an hour or more out from where the loads are likely consigned, and with traffic densities building by the day, on-time arrivals are soon going to be as scarce as places to park.