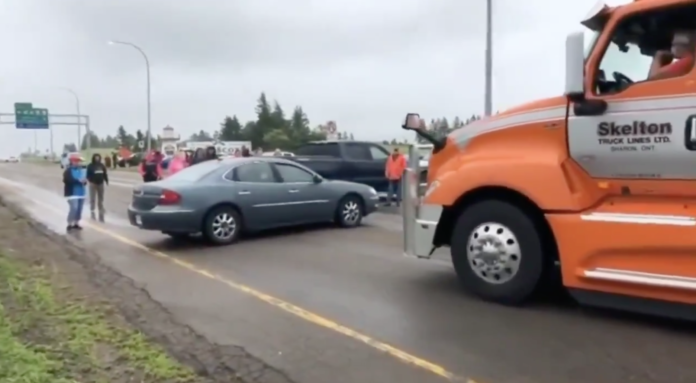 Canadian protesters angered over stringent COVID-19 isolation requirements are barricading roadways and lashing out a truck drivers trying to cross.

This week, groups of protesters set up highway blockades to cry out against the Nova Scotia government’s decision to continue to impose quarantine requirements on travelers coming from New Brunswick after the borders were opened to those from P.E.I., Newfoundland, and Labrador based on vaccination status.

On June 22 and 23, protesters angered by the policy set up barricades on both directions of the Trans-Canada Highway at the Nova Scotia-New Brunswick border.

“So we’re being asked to let a vaccine truck through because vaccines are important. But yet if we’re vaccinated, we aren’t allowed to travel, so how are the vaccines important? No vax trucks pass this point!” one protester said shortly after stopping the truck.

The truck was reportedly allowed to pass after the protesters learned that the driver was transporting blood to hospitals.

The protests left hundreds of truckers and passenger vehicle drivers stranded on the road.

RCMP said that the 24 hour blockade “caused disruptions on both sides of the border to individuals, businesses and vital services such as health care.”

Police say that three of the protesters who refused to comply when officers attempted to dismantle the illegal blockade were arrested and charged with Mischief.