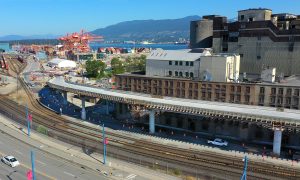 The Vancouver Fraser Port Authority is celebrating the opening of the Centennial Road overpass on Vancouver’s south shore.

The opening of the new overpass, part of the South Shore Access Project marks a project milestone and improvement in the movement of goods to and from the Port of Vancouver to support Canada’s growth in trade. Construction began in the summer of 2019.

On July 4, at 9 a.m., the Centennial Road overpass opened to container truck traffic in both directions. Coinciding with the opening of the new overpass, additional changes to traffic patterns on port roads have also been implemented.

Residents and businesses along Hastings Street, Powell Street, Dundas Street, Nanaimo Street, and McGill Street will notice a decrease in container truck traffic on city streets, as the Heatley Avenue overpass will be closed for outbound traffic.

“We are incredibly proud to announce the opening of the Centennial Road overpass, constructed by our design builder CXP. This marks an important milestone to improve the movement of goods in the Pacific gateway to support Canada’s growing trade,” said Cliff Stewart, vice-president infrastructure at the Vancouver Fraser Port Authority.

The Centerm Expansion Project, being delivered concurrent with the South Shore Access Project, includes expansion of and improvements to the Centerm container terminal to help meet anticipated near-term demand for containers to be shipped through Vancouver. The projects are contained to port land on the south shore of Burrard Inlet, and include:

Benefits of this project include increased efficiency of goods moving by road and rail, and a positive outcome for the community as there will be less trucks on city streets with the closure of the Heatley Avenue overpass.