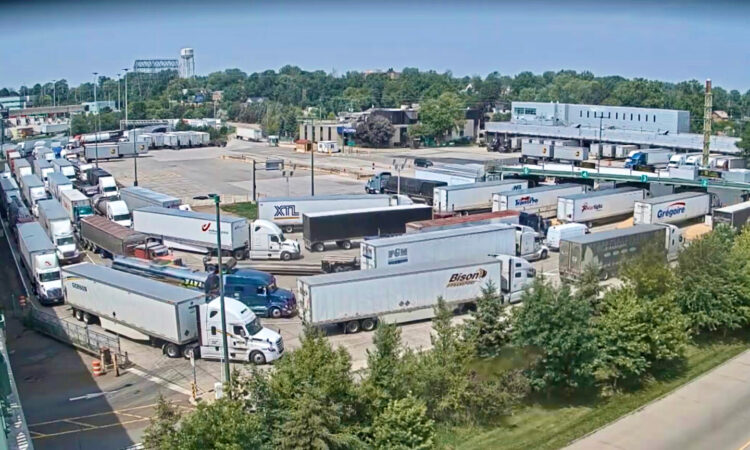 A work-to-rule strike by thousands of Canada Border Services Agency employees ended late Friday after their unions reached a tentative agreement with the Canadian government, capping a day of agonizing delays for truckers.

The deal followed 36 hours of negotiations between the Public Service Alliance of Canada and the Customs and Immigration Union, and the Treasury Board of Canada. It ends a tense day that saw trucks lined up at border crossings across Canada for hours, beginning what threatened to become a costly disruption to the country’s supply chains.

The agreement foresees pay raises over four years, averaging 2% annually. According to the unions, it also includes “protections against excessive discipline in the workplace.

“We are relieved that CBSA and the government finally stepped up to address the most important issues for our members to avoid a prolonged labour dispute,” Chris Aylward, national president of the Public Service Alliance of Canada, said in a statement.

Jean-Yves Duclos, president of the Treasury Board, and Public Safety Minister Bill Blair said in a joint statement that the agreement “recognizes the important work of border services officers. It also recognizes our government’s responsibility to Canadian taxpayers for a reasonable deal, situated in the economic reality of the country.”

The agreement came less than a day after CBSA officers began a work-to-rule strike — effectively a slowdown. By 7 p.m., at least 16 border crossings were reporting delays. The two-hour delay at the busiest commercial vehicle crossing linking the U.S. and Canada, the Ambassador Bridge, paled in comparison to the over 5 hours needed to get through the Pacific Highway crossing in British Columbia.

The delays offered an early preview of what could have hit ports across the country if the labor action continued. The CBSA officers’ unions previously warned that the work-to-rule strike could have a “dramatic impact to Canada’s supply chain.”

The situation likely would have worsened come Monday, when Canada reopens its borders to U.S. travelers.

By engaging in a work-to-rule strike — essentially a slowdown — the unions were likely attempting to flex their muscles while reducing the risk of being legislated back to work, said Sara Slinn, a professor at York University’s Osgoode Hall Law School and a Canadian labor law expert.

“I don’t think they will do more of a work slowdown than is necessary,” Slinn said before the agreement was announced.