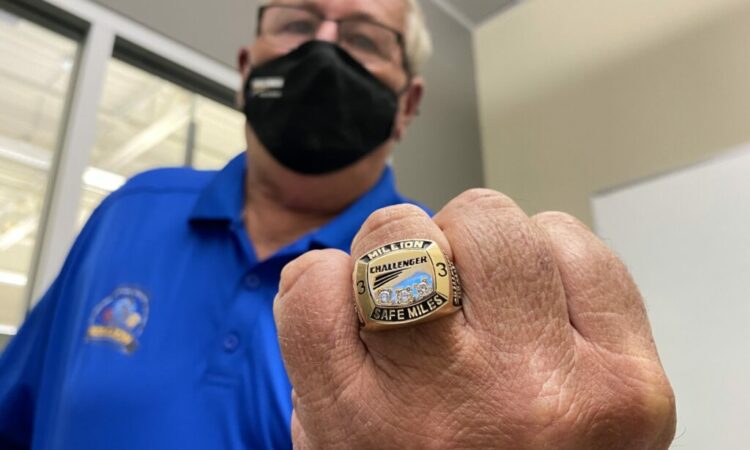 Bob Hagen and Paul Richmond have covered a lot of miles for a fleet that embraces a motto of “we go the distance”.

While more than 100 of their Challenger Motor Freight peers have been recognized for a million or even 2 million miles without a preventable collision, Hagen and Richmond have marked more than 3 million miles (4.8 million km) on their respective odometers.

To put that in perspective, the two Ontario drivers have collectively covered a distance that equals more than 757 trips around the globe, or just over 12 round trips to the moon. Take that, Branson and Bezos.

Following in the footsteps of his father, Hagen left high school for a driving job at Hume’s Transport after unloading trucks as a summer job for $2.50 per hour in the 1960s. Richmond began his career in the 1970s, delivering Canada Dry around Grimsby, Ont., before graduating to bigger trucks in the 1980s.

“At first, my [career] decision was totally based on how good the equipment looked,” Richmond admits.

Neither set their sights on millions of miles behind the wheel. They just did the work. The million-mile marks were passed without any special occasion. Richmond had actually surpassed 2 million miles before he took the time to add up the trip details he records in a personal binder.

It isn’t the only thing the pair has in common. They also stress general awareness and patience as the secrets to safe driving records.

“When you’re beside me, it’s like I’m driving your car, and I’m going to assume you’re going to be stupid,” Hagen says, stressing that he has never had a speeding ticket in a commercial vehicle. “I’ll stay in the right lane from here to Cobourg.”

His wife hates it when he drives the car. When she complains that he’s only 5 km/h over the speed limit, he thanks her — and then slows to the posted limit.

Richmond shakes his head when he sees fellow truckers driving more than 110 km/h on the trips between Ontario and Texas. That may gain about 10 minutes over the 2,900-km trip when compared to his 95 km/h speeds, he says. As for those who rush through a tarping procedure, he wonders how much time they waste having to recheck the load.

“Don’t be in a big hurry. Think about the process,” Richmond says, offering his advice to fellow drivers. “Doing this job, you can’t be in a hurry.” He’ll even walk around a truck four or five times before being truly confident and ready to hit the road. “You only have to walk 70 feet back to check something.”

At times, the universe appeared to conspire against their safety records. Hagen refers to the close call with a car that came straight at him from the wrong direction. And he still remembers the time he had to fight to keep the truck straight as the wind transformed the side of his trailer into a sail on an icy Quebec highway.

Richmond refers to his own “dipsy doodle” when the side of his trailer wall began to appear in his mirror. “It straightened out,” Richmond says of that moment on an ice-covered Highway 401. “I learned my lesson.”

But the enjoyable trips outnumber such close calls. When asked to describe perfect trips that come to mind, Hagen refers to a flatbed load to Seattle, where he stopped to soak in the scenery after enjoying some steak and eggs at the Flying J. He had borrowed a fully equipped Freightliner for that trip, with a 13-speed and plenty of chrome “to make it go fast”.

“The scenery is always changing,” Hagen says. “I enjoy the driving. You’re a paid tourist.”

Richmond remembers the time he shipped a racing team from Montreal to the famed Indianapolis Speedway, where he took a moment to write his name on one of the track’s bricks. “When are you going to do those things?” he says, referring to the advantages of a career behind the wheel. Even the quiet trips down I-80 in Wyoming are memorable. “You can just relax more and look out the window a bit.”

Covering that much ground has taken them plenty of places. Hagen has been to every state and province with the exception of Alaska and Newfoundland. There were trips to Mexico, too. Richmond managed to secure his trip to Alaska when, on a whim, he asked a dispatcher if there was ever a chance to hit the northbound route. The option of the load came the following Monday.

The trucking industry has seen plenty of changes in their decades-long careers.

The trucks are certainly more comfortable than the spring-ride Ford cabover that Hagen used to drive back and forth to North Bay. In colder weather he had to rely on a notch in its accelerator pedal, created for the butterfly nut that would hold the pedal in place to keep the engine idling overnight. “We didn’t have auxiliary heaters.”

Richmond remembers trying to maintain some food in coolers that would plug into a cigarette lighter, wondering just how long the milk would last as the ambient temperatures climbed ever higher. Today his sleeper comes with all the comforts of home, including a freezer and 32-inch television. Things have come a long way since he had to climb through a hole in the wall just to access a narrow mattress. And just to think, when he was equipped with a power jack rather than having to slug cases of Canada Dry by hand, he thought the tools couldn’t get much better.

Some things were lost to the advances, though. Hagen remembers how the foil liners from a cigarette pack could be used in makeshift fuse panel repairs to keep the lights shining. “Whatever it took to get going,” he says. “Now you can’t do anything. Maybe change a light bulb.” Sophisticated electronics put an end to many of the roadside fixes.

And some old habits simply die hard. Each driver admits to carrying and checking hardbound road atlases, even though the journeys are officially directed through GPS units. “I like to look ahead,” Richmond says.

Worst of all, they think drivers have lost the sense of community.

“It’s a whole new industry, but there is no code,” Hagen laments. “No one stops anymore at all.”

“The trucks don’t even seem to have antennas on it anymore,” Richmond agrees. Most new drivers show little interest in chatting over the CB. Even when in line at Tim Hortons, they seem more interested in talking over a Bluetooth headset than engaging with fellow truckers in line.

They each wonder how many new drivers will stick with the trucking industry, rather than treating driving as a stepping stone to other careers.

“I can’t see any more 3-million milers,” Hagen says of the latest generation.

For now, Richmond is resetting his available hours in Laredo, Texas, before pointing the truck northward. Hagen is preparing for his next trip into North Bay after a two-week vacation.

The still have a distance to go.