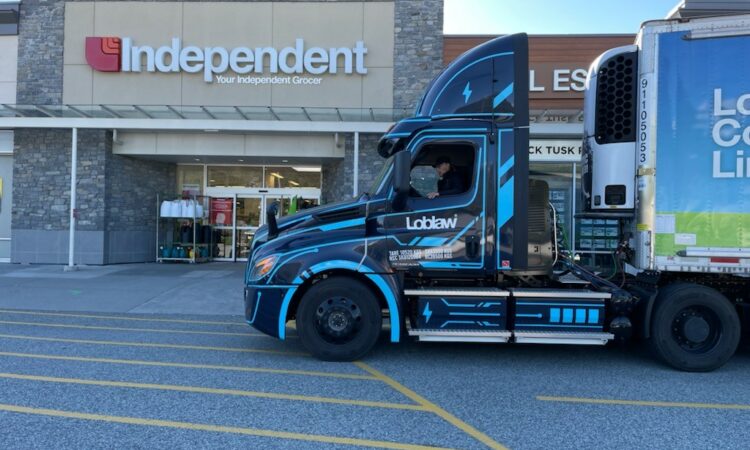 Loblaw was quick to raise its hand to order some of North America’s first Freightliner eCascadias. Now Canada’s largest grocer has officially tested one of the first units on the road – and even used the battery-electric tractor to pull a reefer that features a rooftop solar array.

The end result was one of the first examples of a tractor-trailer moving refrigerated freight without generating any carbon dioxide emissions.

“One driver, you couldn’t wipe the smile off his face,” says senior director – transport maintenance Wayne Scott, referring to one of the drivers who was particularly taken by the quiet-running equipment.

The inaugural run of the eCascadia itself, a refrigerated load shipped between a South Surrey Distribution Center and a store in Squamish, B.C., was completed in late June. But by late August it was also pulling the solar-powered trailer on a trio of trips ranging between 33 and 43 km in length.

“It was a matter of putting it all together,” Scott says.

The trailer developed with Westhill Innovations will move to Calgary for further tests in early September, while the eCascadia returns to Portland for other demonstrations.

The initial tests were established in B.C. because of the jurisdiction’s proximity to Daimler Trucks North America’s headquarters in Portland, Ore., he adds.

It all offered some of the earliest insights into how battery-electric Class 8 trucks could perform in a Canadian setting.

The first run involved a 147-mile (237-km) return journey and a 22,933-lb. payload and a traditional reefer. Leaving the distribution center with a full charge, the truck returned with a 15% state of charge. Within a week, drivers were able to boost that to 20%, after learning ways to better leverage the regenerative braking, Scott says.

Officially the eCascadia’s range runs between 210-257 km between charges, drawing on 390 kWh of usable battery. The truck has a top speed of 97 km/h and a curb weight of 23,500 lb. It can reach an 80% state of charge in under three hours.

A sweet spot for the fleet

The truck’s range also falls into a sweet spot for the grocer’s private fleet.

The demonstration truck also has a lower battery capacity than production models. The prototype comes with 410 kWh of battery power, but the new units will feature 550 kWh. This should increase the maximum range to around 250 miles (400 km), Scott says.

It isn’t the only way Loblaw plans to increase the potential range. A data logger mounted in the truck fed data to Freightliner teams in Portland, gathering insights to coach the driver.

“We think it will get better,” Scott says. “Drivers have to make sure they don’t use the [foundation] brakes to get as much regenerative energy as possible to extend the range of the truck”.

“We’ve got a higher concentration of runs in that area,” Scott adds, explaining why his first deliveries of class 8 trucks will be in Quebec. The province also provides grants and incentives for battery-electric trucks and related infrastructure. A further benefit involves the source of clean hydroelectric power.

But that’s only the beginning. The company has already set one of Canada’s most aggressive electrification mandates.

“Our goal is to electrify the fleet by 2030,” Scott says, also referring to plans to put four electric shunt trucks into the Quebec market next year. “We might have some legacy-type equipment like trailers and reefers, but they’ll all have shore power.”

That will involve investments in trucks and infrastructure alike. Since Loblaw distribution centers are relatively new, however, most have access to the required power nearby, he says.

Maintenance will be left to local Freightliner dealerships, though.

“Predominantly, it’s going to be going to the dealerships until it becomes a little more mainstream,” Scott says. He doesn’t expect the trucks to spend much time in the service bay. No emissions-related service or oil changes will be needed.

“I’m hoping not to use the repair facility really all that much. That’s part of the payback.”