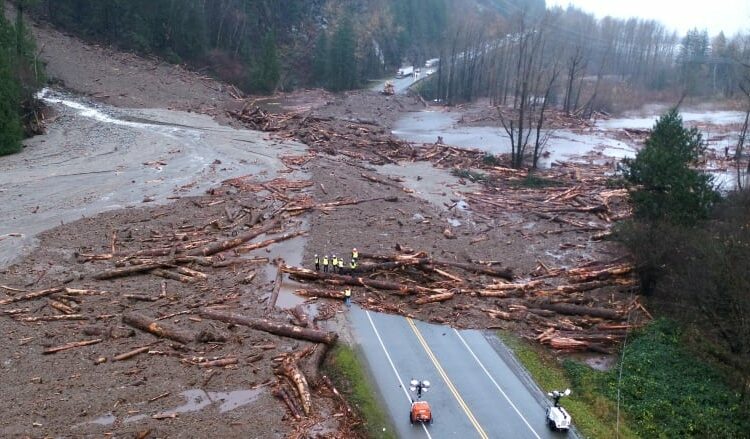 The 4 highway links between the Lower Mainland and B.C.’s Interior are closed, rattling supply chains

Larry Stefaniuk was hauling about $50,000 worth of ground fish from Vancouver Island to a pet food processing plant in Edmonton on Sunday night when he came upon one of the landslides blocking Highway 7 in Agassiz, B.C.

Stefaniuk was among the first to arrive at the slide in the dark, torrential rain. He was forced to leave his truck on the road and find shelter. On Tuesday, it was still on the road.

The clock is ticking for his perishable load. It has a shelf life of about six days, and he didn’t start hauling it until two days after it was ground. That leaves Stefaniuk with only two days before it has to get to the plant to avoid a total waste, he says.

“If we don’t get it moving, it will be too late,” he said. “The logistics of it are too great right now.”

Stefaniuk is one of many freight drivers unable to deliver goods after getting caught up in the chaos of the flooding and mudslides that have largely cut off the population centres of B.C.’s Lower Mainland — comprising Metro Vancouver and the Fraser Valley — from the rest of the country.

There are four highways that connect the Lower Mainland with the rest of the province: 1 (Trans Canada), 3 (Crowsnest), 5 (Coquihalla) and the 99. Highway 7, where Stefaniuk was stopped, runs more or less parallel to part of Highway 1 west of Hope.

They’ve all been closed by landslides and flooding brought on by an extraordinary “atmospheric river” event that dumped a month’s worth of rain on some parts of the province’s south over the course of two days.

Minister of Transportation and Infrastructure Rob Fleming said in a media briefing on Tuesday that Highway 7 could have a clear path by late Tuesday and Highway 3 might be able to reopen by the end of the weekend, but he wouldn’t even hint at when the other three highways could be repaired.

On Wednesday evening, Highway 7 was reopened to westbound traffic between Agassiz and Hope.

“The intent of this opening is to allow those people stranded in Hope to make their way toward the Lower Mainland,” said a spokesperson from the transportation ministry. The highway is set to be closed again following an evacuation of passenger vehicles, with emergency vehicles continuing to have access.

“We fully recognize how important it is right now in British Columbia to reopen the road connections from the Lower Mainland to the Interior to get supply chains moving again,” Fleming said.

For Douglas MacIntyre, another driver stuck behind the Highway 7 slide, the wait has already been tough.

“I just want to secure my truck and find out how to get home,” he said. “The greatest challenge of getting from A to B right now is finding a route that’s open.”

MacIntyre’s load wasn’t going to rot — he was hauling drywall from Port Kells to Penticton. But if he doesn’t move goods, he doesn’t get paid, and surveying the damage across the province’s south, he doesn’t like what he sees.

“It’s going to be profoundly difficult for the transportation industry,” said MacIntyre.

Zeeshan Khan, who volunteers for an organization in Chilliwack that delivers groceries for free to people in need, says when he went to the grocery store near his neighbourhood on Tuesday morning, he saw a line that went all around the building.

“I don’t want to see this again,” he said on the CBC’s The Early Edition. “We saw this at the start of the pandemic, and I think it’s fear.”

He said he’s worried about what will be left for those who aren’t able to make it to the stores on their own.

“We are unable to find any [groceries] in the store or anywhere, and our donors cannot donate anything if there is nothing available in the market,” he said.

Another Chilliwack resident says she’s been using her social media accounts to remind others that there are families and people in the community who might not be able to purchase the food they need right now.

Save-on-Foods said in a statement to CBC News that it is asking customers to “maintain normal shopping habits.”

“We understand that these are uncertain times, and many people just want to do what’s right for their families,” a spokesperson for the grocery store chain said.

No risk of running out of supplies, says trucking association

He said trucking companies are really good at finding ways to move goods around — it’s what they do, and alternative plans are already in motion.

“Just because you’re on the one side of a slide, doesn’t mean you won’t be able to get, for example, fresh fruits or vegetables out of California — they’ll just come a different way,” said Earle.

He said goods will ultimately cost more to move, and thus, consumers will pay more. But he said a 10 per cent increase in shipping cost will generally just add about one per cent to price tags in the store.

Some drivers and companies will be able to route trucks through the U.S., though according to Earle, that comes with its own administrative process and hurdles.

Stefaniuk said if he can get his truck off Highway 7 in time, he’ll consider going back to Vancouver Island, driving north to Port Hardy, taking the B.C. Ferries route to Prince Rupert, then driving across to Edmonton on Highway 16.

It’s a long detour that will add roughly $2,500 in ferry cost, but at least the ground fish will make it to the pet food processing plant before it expires.