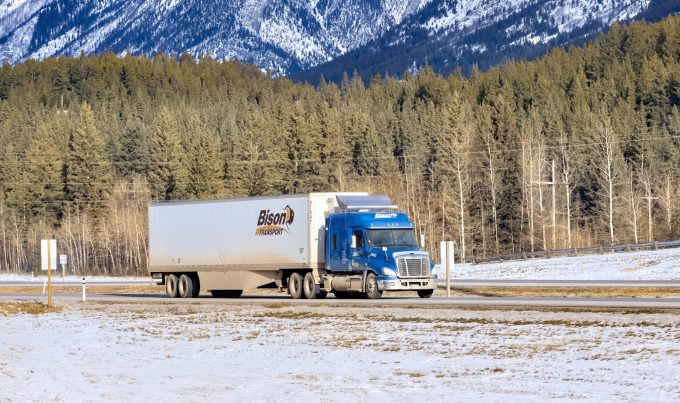 In North American trucking, the year has begun with a couple of takeovers, continuing the M&A trend that characterised the sector last year.

Winnipeg-based Bison, one of the major players in Canada with a fleet of over 2,000 trucks, has resumed its expansion south of the border with the acquisition of Hartt for an undisclosed sum.

Whereas previous purchases in the US had been close to home, Maine-based Hartt offers a network in the eastern US with a fleet of 360 trucks, some 2,100 trailers and terminals in Maine and South Carolina.

“We believe this acquisition to be foundational in strengthening our cross-border offerings and establishing Bison as a Tier 1 US domestic fleet,” said Bison CEO Rob Penner.

The firm had built a presence in the US with the acquisitions of Britton Transport in North Dakota and Wisconsin-based HO Wolding in 2019.

Last January, Bison itself was acquired by James Richardson & Sons, a major Canadian agricultural and industrial conglomerate, and Mr Penner said the change of ownership would give Bison “more financial muscle for expansion” – but it has not flexed it until now.

Meanwhuile, the first US carrier on the acquisition trail this year is Schneider, the seventh-largest operator, buying MLS – a $205m company with a fleet of 900 tractors – to strengthen its position in the Midwest.

“With this acquisition, we believe Schneider is on track to generate $1bn in annual revenue in our dedicated operations with over 5,000 trucks,” said Schneider CEO Mark Rourke, adding that MLS would be run as an independent subsidiary to preserve its identity.

Around the same time as Bison changed owners, UPS sold LTL division UPS Freight for $800m to Canadian transport and logistics giant TFI International and 2021 saw a number of mergers and acquisitions in the US trucking arena, such as Knight-Swift’s $1.35bn buy-out of AAA Cooper and Werner Enterprises acquiring 80% of ECM Transport Group for $142m. And Knight-Swift, the largest US truckload carrier, ended the year paying $150m for RAC MME in its quest to build a national LTL operation.