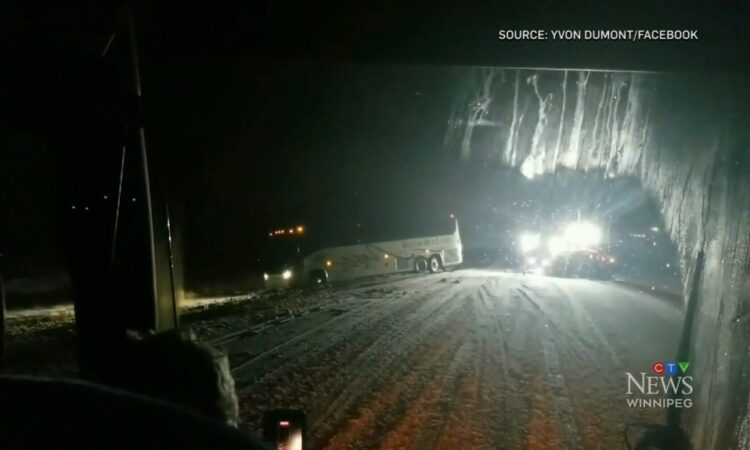 A group of Winnipeggers were stranded for two hours Saturday night outside of Brandon after their bus slid off the road, but a Winnipeg man is crediting a bus driver’s experience and quick thinking for preventing a tragedy.

Yvon Dumont said he was in Brandon Saturday evening watching his grandson, who plays hockey for the Winnipeg Wild, take on the Brandon Wheat Kings in the provincial AAA Under 18 championships.

A group of parents and other fans, including Dumont, had decided to charter a bus for the trip.

“We went to Brandon and we were enjoying the game. It was a close game – a really, really good game. And we came up with the winner,” he said.

Following the post-game celebration, the chartered bus set out on the road to return to Winnipeg. But with the Trans-Canada Highway shut down, the group decided to take Highway 2 back to the city, but were met with winter weather.

“There was about maybe six to eight inches of snow on the road and very, very slippery and very windy,” he said. “We hit a gust of wind I guess, and the bus started sliding sideways heading right for the ditch.”

Dumont said the driver angled the bus so it would not roll when it hit the ditch, leaving the passengers shaken but uninjured.

“It settled in the bottom of ditch and there we were,” he said, adding after about two hours, a tow truck arrived to pull the bus from the ditch.

“We all jumped in the bus and kept going. The spirits were good, though. We won the game and the championship, so we were kind of celebrating in a way there in the ditch.”

Dumont realizes the situation could have been a lot worse, and credits the driver’s skill and quick thinking.

“I’m just thankful that driver knew how to handle that big bus,” he said, adding the group headed back to Brandon and decided to take Highway 1 back to Winnipeg as it had reopened.

“From there it was pretty well clear sailing all the way to Winnipeg.”