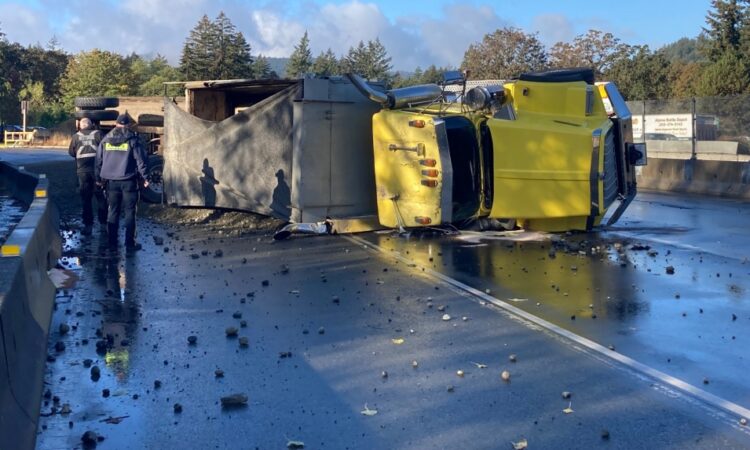 Mounties in Langford, B.C., warned drivers to expect major delays after a dump truck rolled over on the Trans-Canada Highway Monday morning.

The accident happened around 8:40 a.m. near the Spencer Road onramp.

West Shore RCMP say the driver of the truck “lost control” due to wet and slippery road conditions.

A DriveBC highway camera captured the moment the truck began to roll over, with its trailer flipping onto its side first, followed by the truck cab.

Police say the driver suffered minor injuries in the crash and was taken to hospital for assessment. No other vehicles were involved in the rollover. 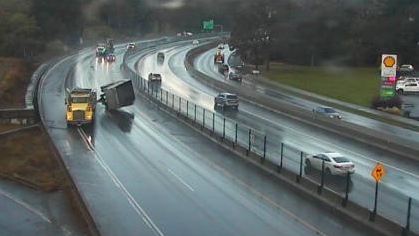 A DriveBC highway camera caught the moment the truck began to roll over, with its trailer flipping onto its side first, followed by the truck cab. (DriveBC)

The truck was carrying a load of gravel at the time, and some if its load spilled onto the southbound lanes of the highway during the crash.

Both southbound highway lanes were closed for several hours, from about 9 a.m. to 12:45 p.m., so crews could clean up the scene.

While the lanes were closed, with the closure marked by police vehicles and traffic clones, police say one vehicle attempted to weave through the police blockade to get past the crash site.

The driver was handed a ticket for failing to obey police direction. Northbound traffic was unaffected Monday morning. 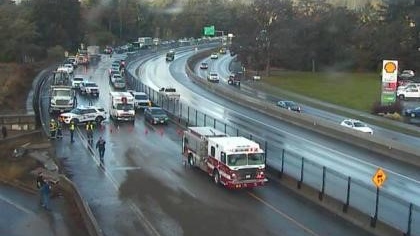 “We want to thank motorists for their patience as traffic was delayed in the area,” said West Shore RCMP Cpl. Nancy Saggar in a statement Monday.

A detour was in effect via Leigh Road until the southbound highway lanes reopened to traffic.