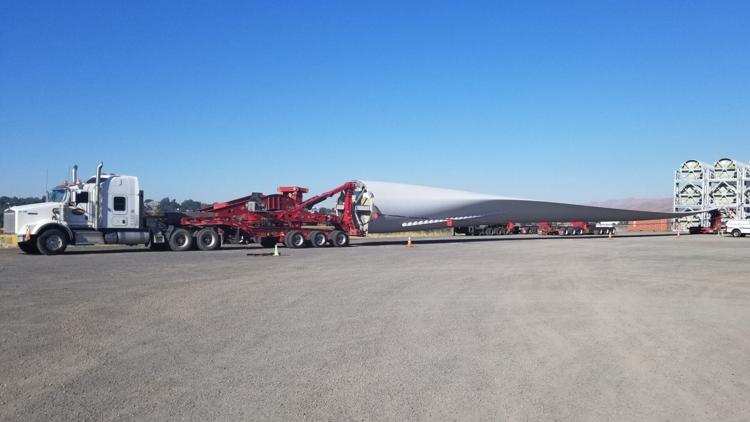 The next load of oversized windmill blades will depart from the Port of Lewiston Saturday night, October 22nd and Sunday October 23rd at 7:30 p.m. The loads will travel north on US95 from Lewiston – ultimately headed to southern Alberta, Canada.

The first load carrying oversized windmill blades left the Port of Lewiston on Wednesday, September 7. In total, more than 80 loads are scheduled to depart, typically with three loads leaving every other day, each departing roughly 30 minutes apart.

Each load will be escorted by pilot cars, with flaggers in place to close the following intersections:

Drivers can expect delays as the loads move through these intersections at night from 7:30pm-9:30pm.

Given the length of the loads, navigating to and through Moscow is expected to be especially slow-going and will require significant closures. The two-lane section of US-95 between Thorn Creek and Moscow will be closed as loads travel through for an estimated 30 minutes each.

Traffic will be allowed to pass before each subsequent closure.

“That section of US-95 is windy and narrow, and the loads will not be able to make those turns without taking up part of the oncoming lane, so we are shutting it down,” Hopkins said.

Each night loads depart the port, no parking will be allowed in Moscow starting at 6 p.m. on the following streets:

While loads move through Moscow on US-95/Washington Street, traffic will be unable to pass. It could take up to an hour for each load to pass through.

“Given the extreme length of these loads and how narrow the highway section is in Moscow, the transport company will move each load at walking pace with staff on the ground to ensure that nothing next to the road is damaged,” Hopkins said.