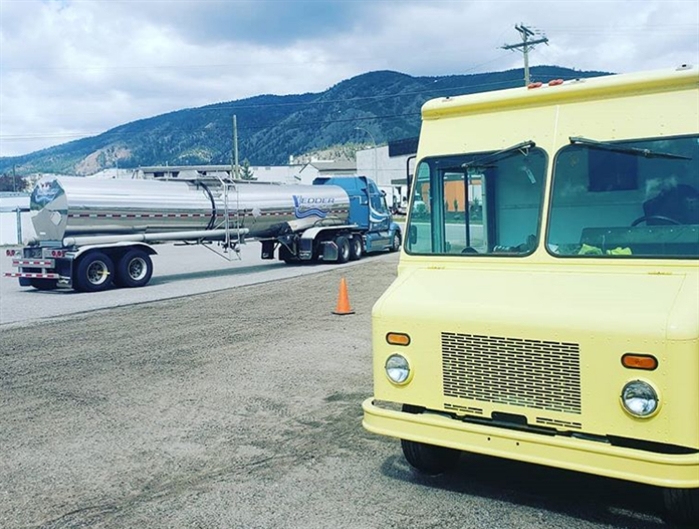 Since the inception of Meals for Truckers the community has donated more than $60,000 to provide truckers with free meals at locations around the province, according to its founder.

Greg Munden, owner of Munden Truck & Equipment Co. in Kamloops, connected with Chevron in early April, asking if a food truck could sit at the company’s cardlock location on Versatile Drive as restaurant closures were creating a challenge for B.C. semi-truck drivers to find a quick bite to eat while on the road.

Since then, Meals for Truckers has spread across Canada and companies have donated more than $60,000 for roughly 4,200 meals at Chevron Commercial Cardlock food truck locations in Kamloops, Kelowna, Chilliwack, Prince George (off-and-on again) and at Kal Tire in West Kelowna, he said. One is also starting up soon in Hope.

Other locations may be providing truckers with free meals, but those are the main ones that are currently providing them based on sponsorship donations, he said.

“The goal was one food truck in Kamloops and we thought, you know if we can make a small difference locally, that’d be great. We would have addressed the issue in a small way,” Munden said. He had no idea his one food truck idea would spread across the country.

After the start-up of the food truck in Kamloops, a food truck opened in Chilliwack and from there the initiative snowballed. Five weeks later, hundreds of food locations, bathrooms and service centres are being added to the Meals for Truckers website, which was created for free from a local Kamloops company, Munden said.

“We’ll support anybody that is supporting drivers and the industry,” he said.

When Munden and his teamed asked Gorman Bros. Lumber Ltd. to help at the West Kelowna Kal Tire location, they jumped on board.

“We have truckers that we see every single day, every single week,” said Nicole Arkle, Gormans gives coordinator with Gorman Bros. Lumber Ltd.

The lumber company teamed up with TNT Dynamite in April donated $3,000 to the cause.

“A lot of truckers are not getting fed at this time. The shops are shut down, places are closed and it’s even tough to go to the bathroom. Having a place for them to eat, when they’re on the road for 16 hours a day, they’re having a hard time to get the basics, (so it’s important)” Arkle said.

“The feedback from drivers has been amazing. They’ve been really appreciative of the support and the generosity and what they do,” Munden said.

With this pandemic, the sliver lining has been how people are realizing how important these truck drivers’ jobs are, he said.

The project was launched with Munden and the B.C. Trucking Association.

Visit the Meals for Truckers website for more information.