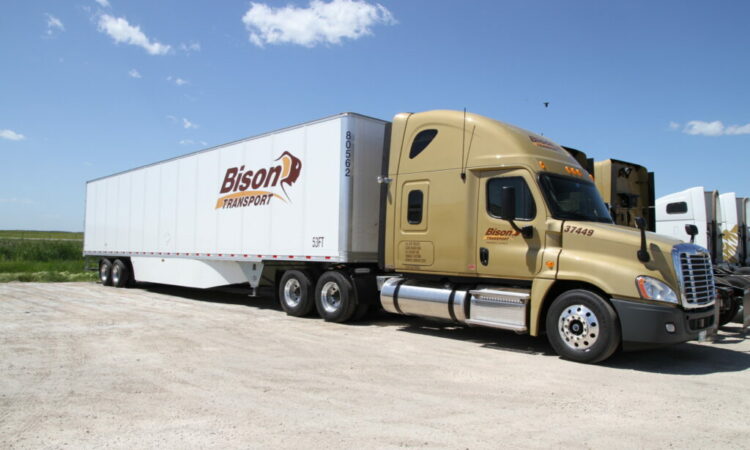 WINNIPEG, Man. – Bison Transport has new ownership it says will enable it to better meet its ambitious growth plans.

On Jan. 1, James Richardson & Sons (JRSL), a Manitoba-based conglomerate whose businesses run the gamut from agriculture to oil and gas production, reached a deal to take over the company from the Jessiman family. Bison was founded in 1969 by Duncan Jessiman and the family’s holding company Wescan has continued to own the company since.

Bison has become one of Canada’s most prominent trucking companies, operating more than 2,100 tractors and 6,000 trailers across North America, with more than 3,700 employees and contractors. It also owns H.O. Wolding, Searcy Trucking, and Britton Transport.

Rob Penner, president and CEO of Bison Transport, said Bison has an aggressive five-year growth plan and needed deeper pockets to execute it.

“We have very ambitious growth plans that require us to be looking at our capital structure and making sure we are not stretching ourselves or putting our shareholder in an uncomfortable position,” Penner said in an interview with Today’s Trucking Jan. 5. “We have always been self-funded and one of the things we see in this market is that there are many different sizes and shapes of targets available. We wanted to put ourselves in the best possible position to take advantage of the marketplace.”

Bison was never officially “for sale,” Penner pointed out, but discussions with James Richardson & Sons advanced rapidly when it was discovered they shared the same corporate values. In fact, JRSL’s oil and gas company Tundra Oil & Gas, shares a similar slogan to Bison’s regarding employee safety, “almost verbatim.”

“We could’ve hired an army of people and searched for potential partners and not found a better fit,” Penner said of the new owners. “In all of their businesses, safety and people come first.”

Penner also assures the new ownership will not in any way influence the perennial award-winner’s existing corporate culture.

“It’s a change in shareholder, not a change in operating philosophy,” Penner said. “It’s not an amalgamation with another company where we’re trying to mould two cultures together.”

Bison will continue to operate under its current brand, and there will be no changes to its executive or management team. The change in ownership will be seamless for employees, contractors and customers, Penner added. However, expect to see Bison making a bigger splash in the mergers-and-acquisitions space.

The company has a five-year plan to reach $1.5 billion in sales, representing more than 50% growth from current levels, and that includes $500 million to come from U.S. operations – a key target for future growth.

“We have huge ambitions for the USA and we have huge ambitions in our asset-light segment,” Penner said of opportunities Bison plans to pursue. “Intermodal is a big piece of our growth, and has been. And yet we continue to stay focused on assets because we understand the shipper expects you to be able to provide capacity and support the ebbs and flows of their business.”

“I am looking forward to the fun part – rolling up our sleeves and doing the thing we really love to do, which is to operate and grow this business.”

The deal took about three months to work out, and staff was notified Jan. 5. So far, reaction has been positive, said Penner, who is celebrating 30 years with Bison.

“I am looking forward to the fun part – rolling up our sleeves and doing the thing we really love to do, which is to operate and grow this business.”